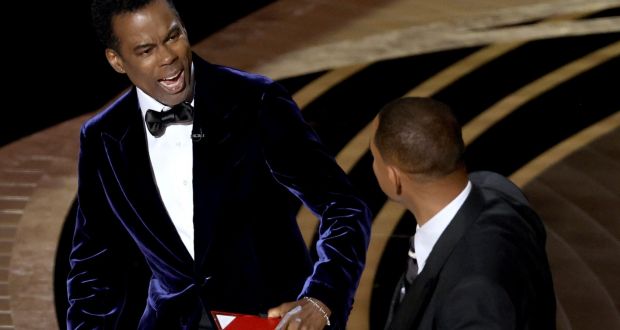 Chris Rock was slapped across the face by Will Smith for making jokes about his wife Jada Pinkett-Smith.

Will Smith invaded the Oscars stage and punched comedian Chris Rock in the face for making a joke about his wife, in a moment that went viral and left astonished spectators wondering whether it was staged or genuine.

Rock had cracked a joke comparing Jada Pinkett Smith’s sharply cropped hair to Demi Moore’s appearance in the film “G.I. Jane” and recommending she star in a sequel when presenting the best documentary prize with a short comedy performance.

Smith rushed up to Rock and smacked him before returning to his seat with Jada and shouted profanities, eliciting awkward stillness and uncertainty in the Dolby Theatre.

“Keep my wife’s name out of your fucking mouth,” Yelled Smith, prompting the producers to bleep out several seconds of audio from the American televised program.

Alopecia affects Jada Pinkett Smith, who is also an actress, and she publicly acknowledged her diagnosis in 2018.

During a commercial break, an emotional Smith needed to be “taken away and comforted” by Denzel Washington and Tyler Perry, according to The Hollywood Reporter’s Scott Feinberg, who was in attendance.

“We’re going to solve that like family, Will and Chris.” “Right now, we’re moving on with love,” Sean “Diddy” Combs remarked as he introduced the next segment.

Spotify's Services Are No Longer Available In Russia