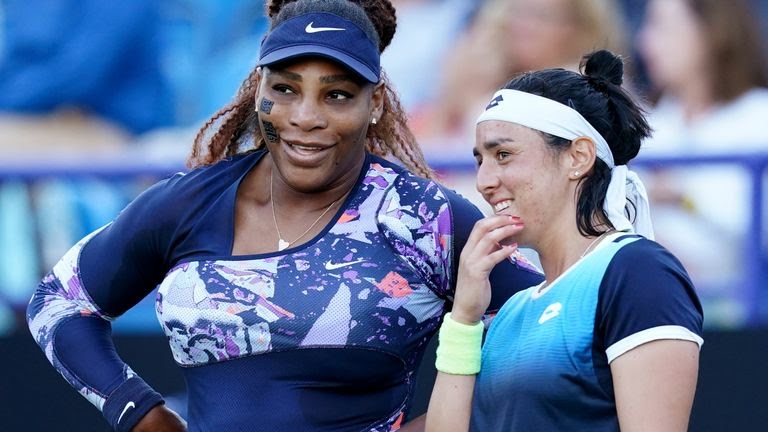 Serena Williams and Ons Jabeur have withdrawn from the Eastbourne doubles because of a right knee injury to the Tunisian.

Williams had played her first two competitive matches since she staggered out of last year’s Wimbledon in tears due to a leg injury at Eastbourne, where she had not played tennis in a year.

With victories over Maria Bouzkova and Sara Sorribes Tormo in the round of 16 and Shuko Aoyama and Chan Hao-ching in the quarterfinals, the 40-year-old American and his Tunisian partner Jabeur advanced to the Eastbourne semifinals.

However, Jabeur’s injury denies Serena the opportunity to improve her grass-court technique before Wimbledon begins on Monday.

Before Williams made the surprise announcement of her return last week. For several months, she was the subject of retirement rumours.

Williams has accepted a wild card into the Wimbledon women’s singles, When the draw is made on Friday, she will learn her opponent for the first round.

Williams had stated after the doubles match on Wednesday, “I feel good. As good as it is possible to feel after taking such a long break. I was mentioning to Ons that this was a pretty excellent match and that they played particularly well in the second set, but we were able to play under different conditions.

I couldn’t have asked for better match play and match practice since that’s exactly what I needed and wanted to do when I came here.

Williams’ 23 Grand Slam singles victories were completed during the Australian Open in 2017.

Four Grand Slam final matches she has since lost, including Wimbledon in 2018 and 2019.

Williams most recent victory came in the seventh of her seven. In 2016, Williams captured her eighth and most recent Wimbledon singles title.

Due to her absence from competition before Eastbourne, Serena, who became a mother in 2017, has fallen to position 1,204 in the WTA rankings.