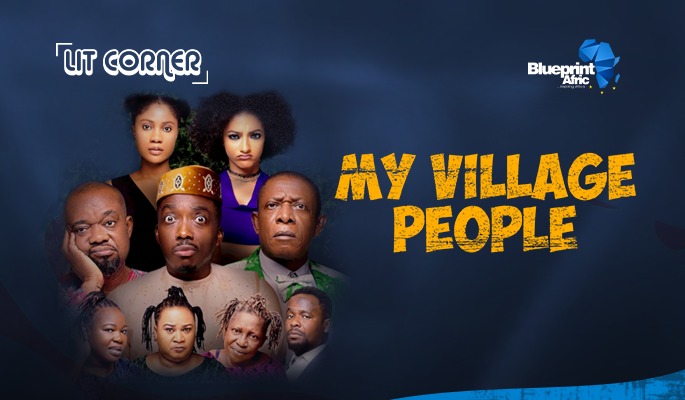 “Prince, a selfish womaniser, finds himself in bubbling hot water after his reckless lifestyle accidentally attracts the attention of a coven of witches who want a mixture of revenge and romance,” – Netflix

Directed by Niyi Akinmolayan, “My village people” is a comic horror that centres on Prince (Bovi Ugboma), an established man who is haunted by his village people. After his travel to the village for his sister’s traditional wedding, his life takes a dramatic turn. He is one who has lived his life devoid of village people. He certainly believes that they don’t exist. His sister had given him multiple instructions not to eat anything or touch anyone, you know the drill, but he defies the instruction and warning and lands himself into the kind of trouble that unravels a lot of mystery.

We all know Bovi is exceptionally good at his craft. His career as a comedian is unparalleled. when you think of a Nigerian comedian, you wouldnt miss him.

Nigeria’s entertainment industry has been one that allows for versatility and growth. We’ve witnessed this with actors, musicians, comedians, taking up different roles in niches they didn’t start out with. I guess that’s why they are called entertainers right? And Bovi has been one of such.

We’ve seen him grace our screens a couple of times and he did excellently well at interpreting the characters. One might argue that some of the roles he has played is one that wasn’t challenging as much, he didn’t leave his comfort zone in any of them, he maintained his essence as a comedian but I guess that is why he is Bovi right? That is his spark. However, his take on ‘village people’ was a bit different, the unconventional Bovi. He embodied his character so well he totally deserves all the accolades.

I enjoyed the storyline and its delivery. It is one of those kinds of stories you’ll see on Africa Magic, but this was much better, more like an upgraded version.

We see how a family history can bind the generation that comes after them. This begs the question: are we really free? Does someone’s family history really define and affect them as a people?

The movie featured some of the veterans we have in the industry like Nkem Owoh, the Late Ada Ameh, the Late Rachel Oniga, Charles Inojie, Amaechi Muonagor, Binta Ayo-Magija and some of the new bloods like, Theresa Edem, Sophie Alakija, Venita Akpofure, and Zubby Micheal. This is a combination we didn’t know we needed.

Plot aside, I thought the movie’s run time was unnecessarily long, there were a lot of inconsequential scenes.  The dialogue would have been better, the cinematography was nice, but the sound was horrible. There were scenes where I thought it was my speaker and I switched to panic mode but alas it was the movie and the sound.

The movie was released in 2021, but this year many viewers saw it with fresh eyes, either driven by boredom or by word of mouth. Generally, “My Village People” was a good watch, don’t expect so much. Go in with an open mind and come out with your mind still open.

Last month, The movie that caught my attention was Glamour Girls. You can read our review here.

Gyakie Releases Music Video For Single "For My Baby"

Rema becomes the latest Nigerian act to be certified Gold in the USA with “Calm Down” selling 500k units. ... See MoreSee Less
View on Facebook
· Share