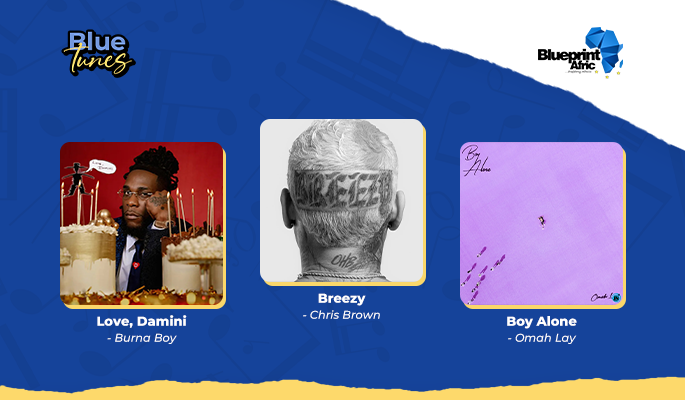 However on this side of the world, Nigerian artists continued to redefine what we think Afrobeats is. These are our top three albums of the month.

Burna Boy has created an indisputable body of work out of his qualms, controversies, and egotistical slights. He has advanced farther on his path from Afro-fusion pioneer to international pop sensation with each subsequent record. It was only a matter of time until Burna recognized he no longer had anything to prove, charting his trajectory from the loud pride of Outside, his major-label debut, in 2018, to the royal posturing that defines African Giant in 2019, and then the bombastic overconfidence of Twice as Tall in 2020.

The album invites the listeners into his chaotic inner world. Burna sings of heartbreak, sadness, anxiety, politics, sex, and love throughout the 19 tracks.

Although Burna insists that his music is Afro-fusion, his most fascinating vocal range and emotional range may be heard on tracks that more closely resemble the sound of contemporary Afrobeats. To convey his intense longing for a love interest who is just out of reach on “Jagele,” we see the African Giant switch it up with his vocals. On “Whiskey,” he expertly lowers his voice by an octave while hammering on the disastrous effects of environmental pollution in his community.

In certain instances, Burna lets his features steal the show by utilizing them to their full potential.

“Cloak & Dagger,” awakens J Hus from his slumber to remind us of his eternally inventive rhyming methods, is the album’s highlight tune. Victony sounds flawless on the doozy of a track that incorporates an amapiano remix.

Khalid’s “Wild Dreams” feature makes use of the singer’s delicate voice and gives us the feeling of being confined in a small place with the song turned up.

The rest of the album deviates into emo-pop with Afro influences. It becomes evident that one of Burna Boy’s faults is a refusal to censor himself, even as he displays greater sensitivity here by deviating from club bangers and towards grief and anger.

Omah Lay has made a reputation for himself in Nigeria’s vibrant music industry. He began his musical career as a rapper, but over the years he has shown his skills in producing and composing music.

Omah lay’s debut album, “Boy Alone,” is a moving 14-track excursion into afrobeat that also presents his voice as a voice that is coldly logical. In the first week after its release, the fourteen track project kicked Burna Boy’s ‘Love, Damini’ which was released on July 7, to occupy the number one spot on the chart.

Omah Lay blends his young good looks with a sensual voice, a lovely pen, a picture-like, adventurous narrative, and casual thoughts on love, passion, and sex.

“Never Forget” talks about coming from an uncertain existence and witnessing a sudden increase in status, affluence, veneration, and renown that may make you feel out of place and cause you to wrestle with existential questions.

Omah Lay also talks about how difficult it is to retain one’s sense of reality when confronted with enticing urges while away from the safety of family in “Temptations.”

As he sings about expressing his hunger for a (female) love interest, the seductive song “Bend You” is flavored with guitar ticks and an enthusiastic tempo.

Less sensual and more contemplative than “I’m a mess,” Omah implores God for clarification since he has been drinking cognac excessively and is confused by life.

The low-key groove of “I” has a catchy repeat in its melody that highlights the eloquence of the song.

Through the beat and balance, the choir background voice elevates your mind and spirit in  “Safe Haven.”

With the singer “Tay Iwar” and pop and R&B artist “Justin Bieber,” Omah Lay attempts to extend the reach of his music beyond the borders of his own country.

It takes a few listens to fully get the “Boy Alone” Album’s style of music. The New album uncovers the new Omah Lay, who has just given us a fresh vibe.

Before Capella Grey enters with his voice and some harmonies, the song “Till The Wheels Fall Off” begins with a melodramatic piano tune. Before Breezy and Lil Durk enter their rapping punchlines. The song serves as the album’s fitting opener; it is an upbeat song about overcoming obstacles and achieving with friends.

With its soft beats and Brown’s heightened delivery, “WE (Warm Embrace)” stands out as a highlight of Breezy.

Ella Mai, EST Gee, and Jack Harlow are featured on “Sex Memories,” “Hmhmm,” and “Psychic,” which match the soulless and vibrant tunes.

Afrobeats and soft pop tones are blended in “Call Me Everyday,” a WizKid collaboration.

He offers us some classic R&B vibes on “Pitch Black,” “Harder,” “Sleep At Night,” “On Some New Shit,” “Luckiest Man,” and the racy track “C.A.B. (Catch A Body)” with Fivio Foreign.

The album contains a number of skippable songs which is expected considering the fact that it is 24 tracks combined with its ‘Deluxe’ Album to give us 30 tracks in total. When an artist completely forgoes their skills in favor of the public appeal, it can lead to unstable growth, as Breezy demonstrates.

Brown wants to showcase his amazing abilities rather than remain static. However, he has lost the touch of the Chris brown we knew and fell in love with.

Last month, #BlueTunes highlighted Rema’s Rave and Roses and Asa’s V. We can’t wait to see what the new month holds for us. From Queen B’s Renaissance which dropped this morning to a Fireboy project, our eardrums are ready!

'So many lies were told,' Wike responds to Atiku’s interview

Buhari Explains Why The Fuel Subsidy Haven’t Been Removed