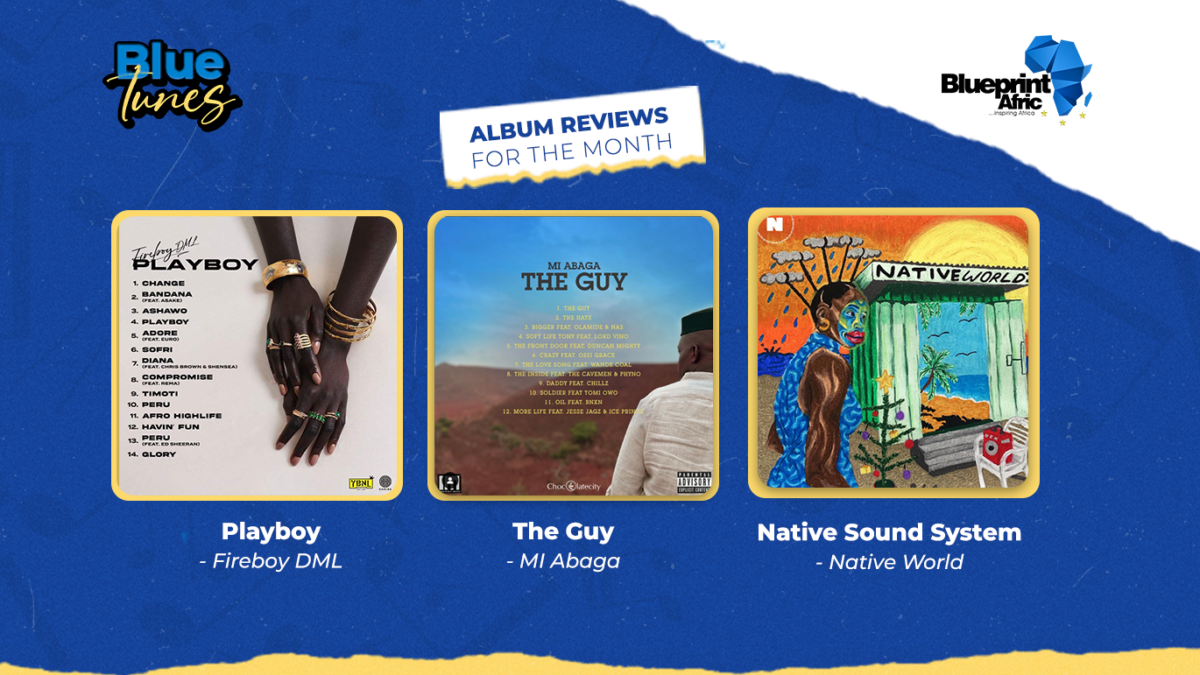 August was a promising month for music lovers; with Beyonce’s Renaissance dominating airwaves. However on this side of the world, Nigerian artists continued to redefine what we think Afrobeats is. These are our top three albums of the month.

Fireboy has shown us over and over again that he is an artist that can blend into all kinds of music genres. He has also given us a taste of what consistency is with this being his 3rd Album since he came into the limelight 3 years ago. He hit different landmarks this year and of them is him being the first Afrobeats artist to perform on an awards mainstage.

I won’t say it is his best album but compared to the other two, “Love, Tears and Goosebumps” and “Apollo”. It is a solid project and many songs have replay value.

He featured a range of talented artists who brought the rhythm and vibes that blended perfectly with Fireboy’s vocals. Ed Sheeran, Chris Brown, Shenseea, Asake, Rema, and Euro are on the album.

“Bandana” features his fellow label mate, Asake, who talks about his journey to get to where he is in the music industry. Fireboy gives us some bars throughout the song which shows his dynamism in being able to blend into a different music genre. Asake brought his PBUY vibes into making the song a masterpiece.

Fireboy has never been shy to talk about his desires in music. He gives us a taste of his desire in “Sofri” which is a lust letter wrapped in soft tempo beats.

“Diana” which is my personal favourite on the album features superstar, Chris Brown and Jamaican Goddess, Shenseea. The calm tune brilliantly mixes the trio vocals with a good blend of rhythm.

Other features are “Compromise” with Rema, which was an expected blend of two different sounds to make something calm and rhythmic.

In Conclusion, the album is a solid project but in comparison to his other albums, it lacks his melodious sounds which we were blessed to have in the other albums. The songwriting, features, and production are top-notch.

M.I Abaga, who changed his stage name to “The Guy” reminds us why he is a legend in the game with the release of his 7th studio album. The album has gotten positive reviews on social media, which goes to show that you can separate an artist from their craft.

The album was crafted to talk about his life, love, success, and many more. However, he continuously praised himself as a legend who has paved the way for younger rappers in the game.

He was heavy on featuring other artists in 10 out of 12 tracks on the album. He featured Olamide, Nas, Lord Vino, Duncan Mighty, Ossi Grace, Wande Coal, Phyno, The Cavemen, Chillz, Tomi Owo, BNXN, Ice Prince, and Jesse Jagz.

I enjoy the album. It shows how M.I Abaga has grown as an artist and has been able to adjust to the kind of sound that is being played today.

“The Hate” talks about the disrespect M.I. Has gotten in the industry, and the accomplishments he achieved before all these younger rappers came into the limelight. He reminds us he has been a legend since he was 30. The beat flows with his sound of warning everyone he is a legend still in the game.

He features Olamide and Nas in “Bigger” which is about the trio’s struggle with fame, luxury life, and their battle throughout everything in their life.

Duncan Mighty brings his afro vibe sound into “The Front Door” which talks about how to get woo and seduce a lover. It is a feel of amapiano and afro highlife that flows with both their sounds.

“Crazy”  one of my favourite tracks on the album presses on mental health with Twitter as a point of reference. MI Abaga referenced “Ricky Rick” in his verse. Ricky Rick was a south African who took his life due to mental health. The track tells people to be considerate of what people are going through in their personal life and be kind to everyone.

M.I Abaga recently got engaged and the song he used for his proposal video was “Love Song” which got everyone searching for the track. The song talks about his love for his Fiancee and continues to Praise her through his verses. I was jealous #GodWhen.

Wande Coal’s vocals on the chorus and M.I’s expressive verse blend with the highlife beat.

“The Inside” is a perfect mix of Igbo highlife and mellow R & B that blends perfectly well with Phyno, The Cavemen, and M.I Abaga’s sound. It is a brilliant mix of Traditional and Modern sounds.

The album ends with other four songs, Daddy ft Chillz, Soldier ft Tomi Owo, Oil ft BNXN, and the chocolate boys, Ice Prince, and Jesse Jagz on “More Life”. The end of “More Life” was a coin drop, which I found significant to the album’s ending.

Generally, the album has gotten positive reviews from people especially the Gen Z crowd. It also signifies that M.I Abaga is a legend who is still in the game.

“Native Magazine” has released its official debut album under Native Sound System. It features almost if not all the new kids on the block and the hottest artists in the industry.

I enjoyed the album because it is a perfect blend of R & B, Afrobeats, Highlife, Hip-Pop, and many other genres of music. It also brought out the Alte community’s creativity which has gotten the recognition they deserve over the past few years.

The first track on the album, “Tortoise” is a fusion of Highlife, Dancehall, and Afrobeat. The Cavemen and Sholz are a perfect match for vocals and superb production.

Lojay and Ayra Starr’s vocals on “Runaway” immediately pushed the song to the top of my list. An instant personal best.

“Wedding Ring” is a mid-tempo sound that infiltrates perfectly into the setting of a Nigeria Wedding. WANI, BOJ, Odunsi, and Odeal held the fort down in their vocals and sounds. it blends Afropop, and R&B to give us an intimate and romantic setting.

Gabzy takes us through a calm chill throughout “TGIF”. His vocals mix with the beat that presents people with a soft feeling on the weekend.

“Pressure” with Alpha P and Lady Donli gives drums, beats, and instrumental sound that gets people dancing from the beginning to the end of the song.

Other notable tracks on the album are “Stuck on You” with Ayra Starr, LMBSKN Aand DAP The Contract, “Good Good” with Joyce Olong, SOLIS and Azanti, and “Cold Freestyle” with Bloody Civilian and SHOLZ.

For a debut album, Native Sound System has shown that they can create magic with amazing artists and talented producers. The album is a definition that “Too many cooks don’t always spoil the broth”

Last month, #BlueTunes highlighted Burna Boy, Omah Lay and Chris Brown’s projects. We can’t wait to see what the new month holds for us. From Queen B’s Renaissance which dropped this morning to a Fireboy project, our eardrums are ready!