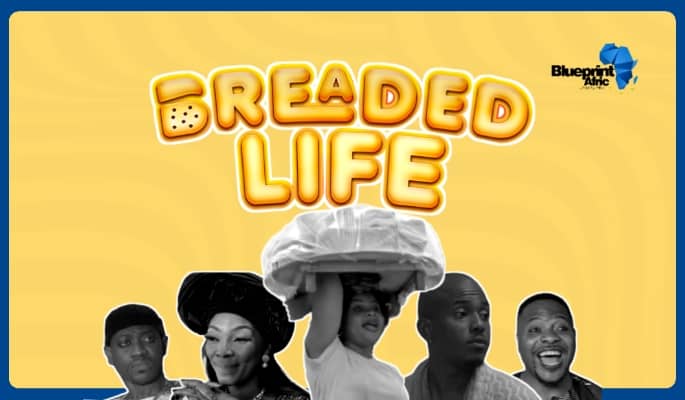 “An irresponsible young man in conflict with his mother wakes up one day and to his surprise, no one he knows can recognize him, except for a local bread hawker.”   – IMDB

Breaded life is a Nigerian comedy directed by Biodun Stephen. The story centres on Sunmisola Smart-Cole (Timini Egbuson), an irresponsible and arrogant young man from an affluent family.

Timini acted here because I never get upset at characters and yet! Sunmisola doesn’t know anything of responsibility, to work a day and take charge of his own life. He is spoiled, all he is interested in is partying and ‘jaiye jaiye’ is always at loggerheads with his mum.

I thought it was going to be one of those “African Mum” moments, but was I wrong??  Breaded Life is a story of a young man who is lazy and stubborn and has refused to take charge of his life because he believes his family’s wealth has got him covered for the rest of his life.

He was constantly arguing with his mom and never agreed on anything mostly because he has coconut head, he just didn’t listen. She tried to help get his life in order but it has yielded no result.

And then one day, everyone forgets him.  Yep, everyone. He just vanishes from everyone’s consciousness.

This jolts him into an entirely different reality, now he is left to fend for himself.

Sunmi(Timini Egbuson) then learns the reality of life the hard way, until he meets a bread hawker Todowede Sewedo (Bimbo Ademoye), the only person that remembers him.

She takes pity on him and shelters him but now, Sunmi has to fend for himself, like work to earn a living and survive.

Breaded Life was an emotional roller coaster. I loved the plot, and the message it tries to pass can never be overemphasized.

My unpopular opinion is that it never gets old-  watching a proud rich person learn a significant life lesson through experiencing the struggles and hardship, especially if they were condescending to the poorer folk.

The movie explored the dynamics between people of different classes and lifestyles, bringing to light the disparity between these two classes and how they view life from different perspectives.

Attention to detail is one to look out for.  The bustling hellscape city of Lagos is shown in a different light, something different from what we are always shown in Nollywood movies (I’m talking to you, Lekki-Ikoyi.)

His co-stars also acted their hearts out; the legendary Tina Mba, the stunning Bimbo Ademoye and the multitalented Bisola Aiyeola too!

The imbalance in life is shown so clearly, so I found it relatable. It’s a lovely watch, you could feel the emotions the actors embodied in their characters. One minute,  I was in my feelings, the next I was laughing my heart out. The casting worked.

The lead, Timini Egbuson, deviated from his usual characters and he conveyed it beautifully, playing to his strengths. Are the days of loved boi, and toxic king Timini over?

I wouldn’t have expected him in this kind of role and it goes a long way to show how versatile he is as an actor.

Breaded life is a movie you should see if you haven’t, it’s a beautiful story well told.