Home > Opinion > Five Nigerians Talk About Cheating On Their Partners 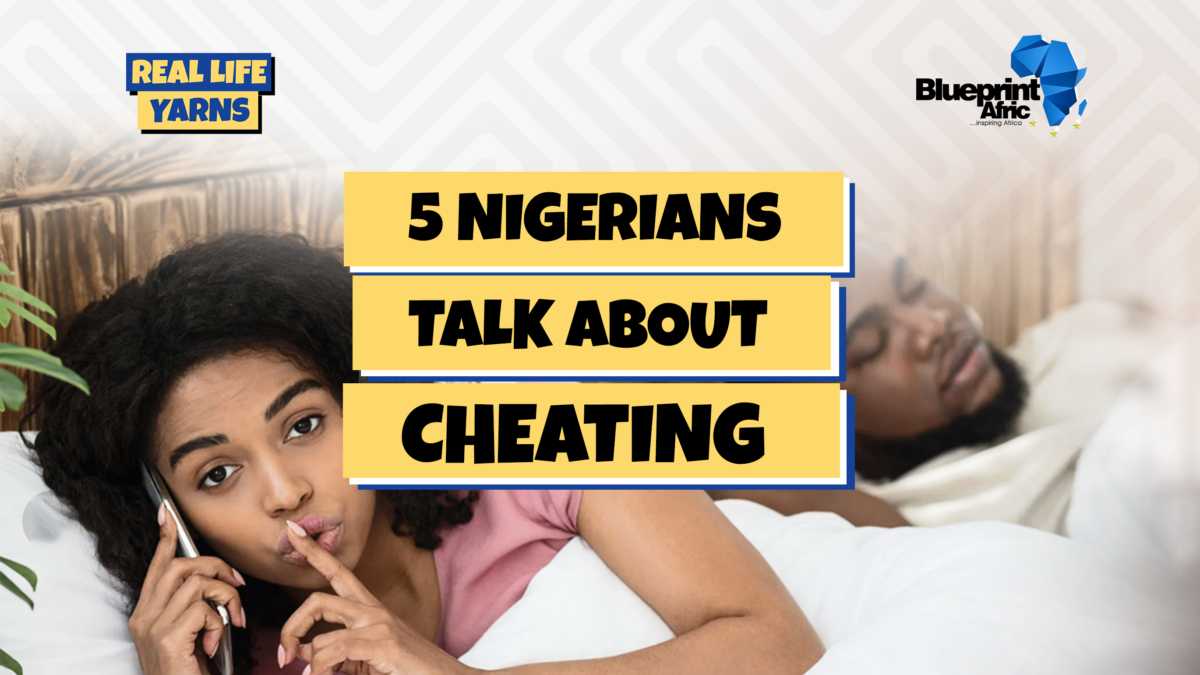 Cheating and infidelity will always be an existing part of an unhealthy relationship. It happens and that’s the sad truth. It has eaten deep into our relationships so much so that it leaves you with two choices; can you deal with it? If yes, you stay. If not, you’re out the door.

Micro infidelity, this bothers on flirtatious comments, conversations and chats with someone other than your partner.

Today’s episode of Real Life Yarns was inspired by a friend who mentioned that they’d caught one of their parents cheating and how it changed their views on love and relationships.

I spoke to people, asking them to share their different cheating experiences and the situations that surrounded it.

“I had a guy that really loved me but I’ve been cheated on by guys who did not appreciate me, people who managed me, you know the “I like this person’s personality but I don’t like the body this personality comes in” scenario? That’s it,” Valerie said.

You know when someone loves you they don’t hold back in showing you off to the world, with this guy he did all that but like I said I thought he just wanted to get into my pants. I was in school. In my 2nd year, school was on vacation and  I lived in Lagos at the time and he lived in Enugu. I had a guy that was asking me out, he invited me over to his place, I mean then I was so fine and slim, It’s not now that I have a big head. He lived on the island and I on the mainland. He promised to handle my t-fair to and from. It was supposed to be a date, at least that was the plan but you know Lagos men live for inviting women to their houses.

I biked from the mainland to the Island because I wanted to beat the traffic. I waited for another 3 hours before he got back to the house. I was already uncomfortable at the time considering he already had guests over. I had started rethinking my decisions. I mean did I go through all this wahala to come see someone who is not my boyfriend? I told him I wanted to leave but he said it was too soon.

He locked the door behind him after he walked into the room I was in and then tried to sleep with me. I was saved by his cousin.I had to tell my partner, it broke his heart. He cried, that would be the first time I would see a guy cry for me, I mean it solidified the fact that he actually loved me. Few months after the ordeal, guess what? I still cheated on him with someone else.

Linda cheated because she could. Period.

Linda said he never noticed and she eventually broke up with him. She regrets nothing.

I was in a relationship with someone I think I actually liked at the time. But her friend was in the picture. Her friend being in the picture wasn’t much of a problem at all. She was more like a middle man between us whenever we had issues. Until she told me she liked me. I didn’t think much of it.

After I travelled for vacation, I fell ill to the point of hospitalisation and my partner’s friend was in the same city as I was. She was physically present for me more than my babe was. Not that I was complaining, I mean it was beyond her and she couldn’t do much physically from where she was.

I grew attached to her friend and I cheated on my babe with her. It wasn’t intentional I guess. It was more like an unfortunate situation which I found myself in. I told her after it happened. She felt bad obviously, but unfortunately, we had to break up because it tampered with the trust we had built over time.

I had a serious relationship while I was in Abuja. It was perfect. I was transferred to Enugu And the distance took a toll on the relationship. We were together for 3 years. You know the expression “Out of sight, out of mind.” it’s really true, especially when they are not your family.

We were still together when I got close to a guy here in Enugu. We got talking and I was beginning to get attached to him while my relationship was suffering. He did absolutely nothing wrong. I finally fell in Love with the guy here in Enugu because he ticked all the boxes for me.

We got physical, there’s this thing with getting physical with someone you think you love, you know know sometimes sex makes you feel you are in love with the person when you are totally not. I stopped picking up my partners calls, I would reply to his messages days after he sends them with a “Hi”.

All the talk about not going through a man’s phone is something I don’t believe in. Sometimes go through his phone, it lets you know where you stand with him. One day I picked up his phone, my intention wasn’t to snoop, I just picked up my supposed boyfriend’s phone and went through his gallery, I saw the pictures of the girl and the son. I didn’t confront him immediately. Most times when he told me he was travelling to see family, it was the girl and the son he went to see.

Few days later I casually asked him if he had a child and he flared up and I saw a side of him I hadn’t seen before. He denied it. He admitted a week later but he made it sound like he wasn’t interested in the girl that she was the one holding onto him. I remember his colleague telling me he wasn’t leaving his babe for me. It confirmed my suspicions, but I needed him at the time to be honest and straightforward so I’d know where I stood with him, if we were using each other the feeling would at least be mutual.

BNXN Performs New single 'In My Mind' On A Colors Show.