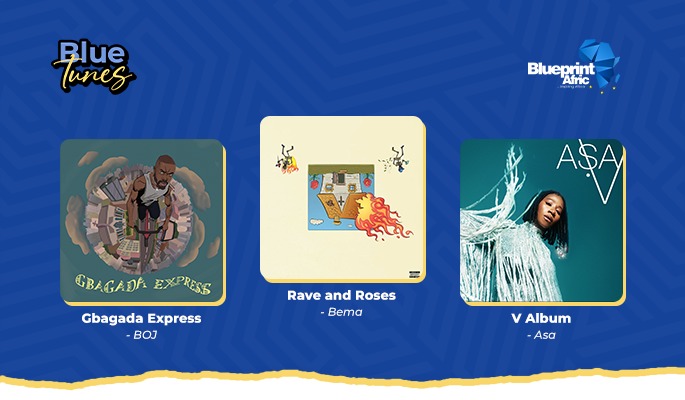 Bolaji Odojukan, popularly known as BOJ, was raised both in England and Nigeria. He shot to fame in the early alt-scene in the middle of the 2010s, and with his landmark 2018 Skepta collaboration, “Like to Party,” he gained public fame.

Gbagada Express starts out soft, with romance and seduction we’re familiar with from Boj. When we get to its trap song Get Out the Way, featuring Ghana’s Kofi Jamar and Joey B: it still pulses delicate, giving slowed-down highlife guitar and saxophone, similar to South Africa’s famous Amapiano.

Action Boyz is the polar opposite of its namesake, with an almost ambient soundtrack for Boj and Londoner Obongjayar tag-team about staying out of trouble.  Moliy, Mellissa, and English rapper Enny feature in, In a Loop and Culture, which are two of my best tracks on the Album.

The album also features some of Afrobeats’ most remarkable artists, like Davido, Tiwa Savage, Wizkid, and Mr. Eazi.

Listen to the album now on Apple Music.

The French-Nigerian singer Asa’s fifth album, V, released less than three years after her last one, may be her most artistic effort to date.

Asa’s specialty is melancholy, paying tribute to the line of guitarists she comes from, who perform a cabaret-style mix of soul music with African rhythms.

Love, in all of its manifestations, fuels her music as it does her life. Love in motion, whether passive or aggressive, sour or sweet, but as is to be anticipated, the true nature always prevails.

The album has an ambient, happy vibe thanks to the afrobeat kettle drums shuffle, soothing melodic riffs, and a tenacious mid-tempo.

The track list becomes more consistent as the listening experience goes on, with every track giving a different experience.

Asa and Wizkid’s vocals on “IDG,” embodies the recklessness of afrobeat. Asa, the baroness of unfulfilled love, makes a triumphant comeback in “Nike.” “Good Times” pays respect to Capella rhythms, South African music, and our tenacious selves who have outlasted the Covid-19 pandemic.

I believe you may discover the fervent warmth of Eddie Okwedy’s “Happy Survival” courtesy of The Cavemen in between the evangelical pristineness of Panam Percy Paul and black pride of Paul Simon’s Graceland.

Among the current generation of Nigerian music singers, Rema has solidified his position as one of the scene’s main innovators. Having released three EPs in his early career, he surely might be recognized as one of the most significant figures of his time.

Rema’s rise to the booming presence he commands now is explored in Raves & Roses. The adventures he chooses to share with us come from a wide variety that is only possible for a star.

The opening song, “Divine,” a cut made from Rema’s genuine name, “Divine,” becomes an x-ray of Rema’s starting from the moment of his birth as she weaves the tale of his beginning on clear strings. The addition of soulful rapper  6lack to the love song “Hold Me” was just what the music needed.

Rema writes “Time N Affection,” a love song that calls a potential partner and woos her with all of his valued belongings. Chris Brown performs flawlessly to create what will probably become a summertime bop.

Jo is a remake of Blaq JerZee and Wizkid’s song “Blow.” One of this album’s outliers is “Are You There.” It’s pedagogical, jangly, and upbeat.

Rema praises Nigerians for their perseverance in the face of insurmountable obstacles while jokingly mentioning Buhari (Muhammadu).  ‘FYN’ is rife with empty rhetoric. With his alloyed rap verse, AJ Tracey shows up.

The final two songs on the album are “Wine”  featuring French songstress Yseult and “Runaway,” which has a more modern sound and has become a favourite upon many listens…

Rema’s “Rave and Rose” is a clever perspective on love, sex, and everything in between, except for a few short padding.

In his own words, “People dey talk say na only woman I sabi talk about So lemme make I just dey talk about am!”