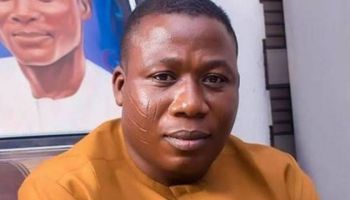 When the SSS stormed the house, they detained 13 individuals. Its spokesman, Peter Afunanya, said this at a press conference in Abuja on Thursday.

Mr Afunanya stated that the operation was predicated on an information tip that Mr Igboho had stored guns in his house, and that when the SSS operations team arrived at the residence, they were met with a strong gun onslaught by nine men believed to be Mr Igboho’s guards.

“Two of Igboho’s armed men were killed during the exchange, while the rest were restrained and apprehended. Only one DSS agent, who was shot in the right hand by the attackers, was injured. He has, however, received medical care and is in good condition, according to the SSS.

A “jackknife, one pen knife, two gun holsters, one binoculars, a wallet containing $5 in one-dollar currency, and local and foreign driver’s licenses in Mr. Igboho’s name” were also confiscated by the SSS.

He claimed the briefing sought to tell Nigerians and the rest of the world that Mr. Igboho’s drive for self-determination was a ruse to stockpile weapons and disrupt public order.

The coordinated assault of Mr Igboho’s residence, according to the SSS, proved a “grand plot by Igboho and his associates to launch a violent rebellion against the Nigerian state.”