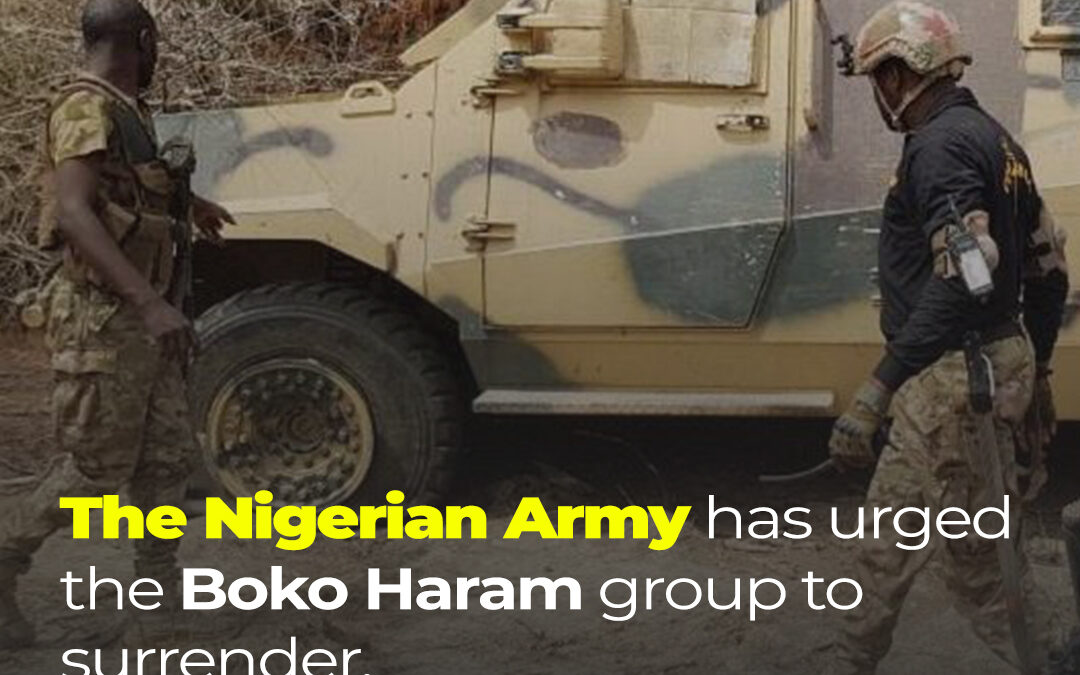 The Nigerian Army has urged remnants of the Boko Haram terrorists to surrender and embrace peace.
The General Officer Commanding (GOC), 7 Division, Nigerian Army, Brig.-Gen. A.A. Eyitayo, made the call at a feast organised for journalists by the army on Sunday in Maiduguri.

Eyitayo, who is also the Commander Sector 1, Operation Hadin Kai, said the recent military onslaught against the insurgents dealt decisive blow on the terrorists leaving their remnants in disarray.

He noted that nobody including the military was happy over the bloodshed, hence, the need for the remnants of the insurgents to leverage on the amnesty and repent their nefarious ways.
This, he said, would avail them (insurgents) opportunity to enjoy rehabilitation and acquire skills to enable them to live a useful live in the society.

The GOC lauded the contributions of the media in the counter insurgency campaign and urged it to enlighten the insurgents to see the light and repent from their wasteful ventures.

“We are not here for bloodletting, nobody is happy that people are dying.

Some of them (insurgents) are listening to the media so it is good for us to appeal to them through the media to shun violence, turn up to seek forgiveness and reconciliation,” Eyitayo said.

According to him, the feast with journalists was to show appreciation of the media reportage of military operations in the state.
“For the past three months since I assumed duty in Maiduguri in this capacity, there has never been any bad report. “This is to appreciate the media for positive reportage,” he said.

In his remark, Mobammed Ibrahim, Secretary, Nigeria Union of Journalists (NUJ), Borno State Council, commended the GOC for carrying the media along and assured him of more support and cooperation.

A Japa Tale: A Heartbreaking Truth On Emigration By Dike Ofoma