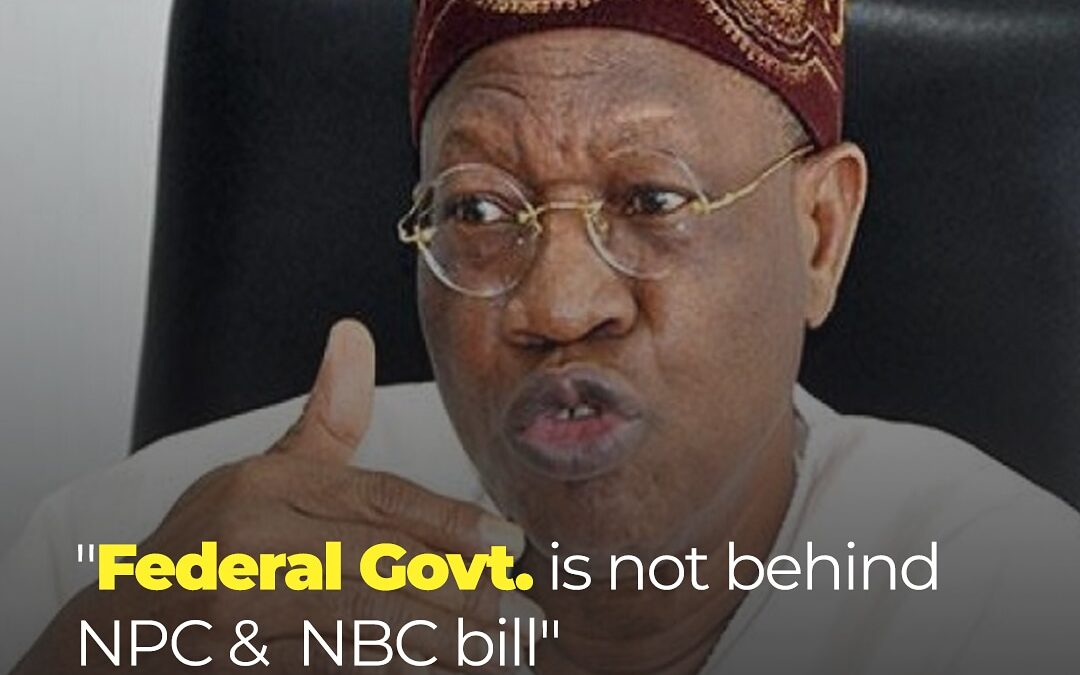 The minister stated this in an interview with the News Agency of Nigeria (NAN) in Lagos.
He stated that the bills concerning the Nigerian Press Council and the National Broadcasting Commission were private member bills sponsored by a lawmaker in the National Assembly,
“First, let me say how disappointed I am that those who have been berating me on these bills have been doing so on a false premise that the Federal Government had sponsored bills to stifle the press.

“This is a classic case of misinformation because the Federal Government did not sponsor any bill to gag the press.It baffles me that those who rushed to the media to slam the government and didn’t even try to verify the facts,’’ he said.

The minister clarified that the National Assembly member who sponsored the bills had done nothing wrong. He went on to say that the legislator was only doing what he was elected to do.
“I insist that the bills were not sponsored by the Federal Government. I was invited, as the Minister of Information and Culture, to make my contributions, just like many other stakeholders at the public hearing. It was an opportunity for stakeholders to make their input into the bills. I attended and made my contributions,” he said.

The minister also said: “The Nigerian Press Organisation, which represented the Nigerian Union of Journalists, the Nigerian Guild of Editors and the Newspaper Proprietors’ Association of Nigeria, appeared there merely for appearance sake.Instead of strongly stating their reservations on the bill on the Nigerian Press Council, they were more interested in stopping the hearing, hinging their argument on the case at the Supreme Court on the Press Council.

It is a shame that some of us love democracy so much but hate the fine details of democracy and its processes.These critics will rather play to the gallery than do the needful.Why didn’t these critics show up at the much-publicised public hearing on these bills?Why have they instead opted to go hysterical in the media and to point accusing fingers at the Federal Government as the sponsor of the bills when indeed that is not true?”

The minister advised the critics of the bills to engage with the Chairman of the House of Representatives Committee on Information, National Orientation, Ethics and Values to convey their reservations. He said they should stop engaging in cheap blackmail and misinformation, stressing “you cannot like democracy and abhor its processes.’’

NAN reports that the House of Representatives Committee organised the public hearing on five bills on June 16 and June 17. One of the bills being “A Bill for an Act to Amend the National Broadcasting Act to strengthen the Commission and make it more Effective.’’ The other is a bill seeking to amend the Nigeria Press Council Act to enable the Council to effectively carry out its regulatory role on media practice.
(NAN)