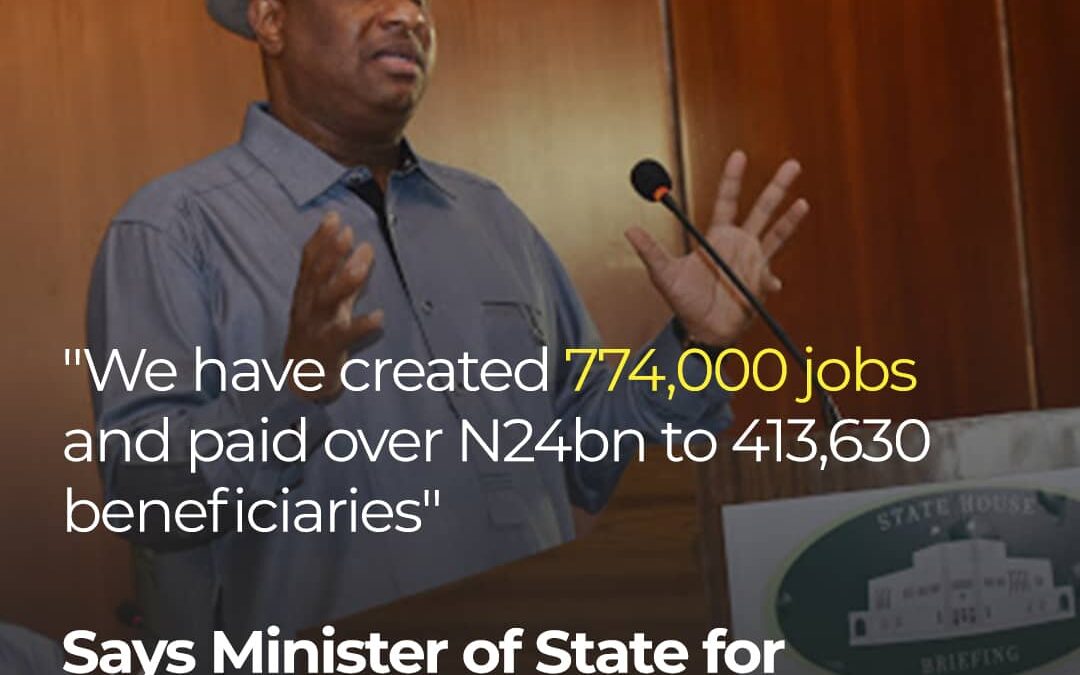 The Minister of State for Labour and Employment, Festus Keyamo, SAN, said as of yesterday 24th June 2021 N24 billion had been paid out to beneficiaries under the 774,000 special public works scheme. He also said that 413,630 Nigerians, drawn from rural communities and mostly itinerant workers in different local government areas, have received their payments from the social work job.

Keyamo, who disclosed this during a media briefing coordinated by the Presidential Media Communications Team, at the Presidential Villa said the initial delays that greeted the programme had to do with discrepancies noticed during the registration phase, especially with bank verification numbers.

The minister said despite his attempts to ensure due diligence in the implementation of the programme, he uncovered that some fraudulent Nigerians opened multiple bank accounts under a single BVN.

According to him, efforts to separate genuine applicants from those trying to fleece the scheme of its resources accounted for initial delays recorded in the kick off of the programme.
He also told State House Correspondents that the lockdown, occasioned by COVID-19 pandemic did not only temporarily stall the implementation process, but also led President Muhammadu Buhari to expand the programme to enable those in the lowest cadre of economic strata benefit.

The minister said President Buhari deserved commendation because it was the first time itinerant workers were benefitting from a federal government social intervention scheme, as beneficiaries were drawn through a multi sectoral approach.

He said: “When we wanted to introduce the special social works scheme here in Nigeria, the President first approved the pilot scheme, because he thought, perhaps we needed to test run it to see what we can apply here.”
“So the first thing the President approved was that we should do eight states at that time. And not all the local governments were just five, in selected states originally, that was in late 2019, then I just became minister.”

“So we started implementation in January 2020 in eight states, we just started one month into the implementation when COVID struck. So we could not actually complete it at that time, the Federal Government released one month stipends at that time to pay in those eight states.
“So during the lockdown, we discovered that at that time, small businesses suffered the most, so many people could not go out to earn a living , especially those who depend on daily pay. The people that were worst hit by the COVID lockdown were the people who go out daily to market or bricklayers among others.

“So the President was very concerned about this kind of people during the lockdown. He thought that If people don’t receive money daily, there’ll be a revolution. We had to quickly react and find them something to do. So he said, look, this pilot scheme should be expanded. Let it cover all the states and all the local governments now quickly, it was a quick response by the President. He was also audacious about it.