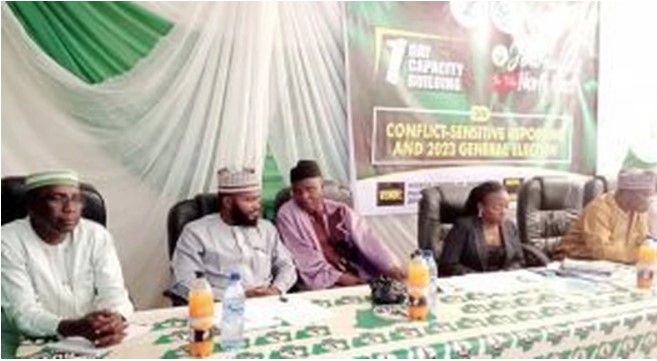 The Independent National Electoral Commission (INEC), has called on all media organizations in Nigeria to avoid the ‘breaking news syndrome in their reportage as the 2023 general election draws nearer.

The National Chairman of the commission, Prof. Mahmood Yakubu, made the call in Bauchi on Thursday during a one-day capacity-building program for journalists on conflict-sensitive reporting and the 2023 general election.

Organized by the Nigeria Union of Journalists (NUJ) and INEC. the program was for journalists in the North Eastern part of the country.

Yakubu, represented by Alhaji Nasir Mohammed, said that the tendency for the ‘breaking news’ syndrome could result in dishing out unverified or not properly processed information to the general public.

“The media must be circumspect in casting headlines and detect sensational lines because sometimes, people look at the headlines and draw conclusions without looking at the body of the report.

“The media must avoid deliberate falsehood. They must also avoid tilting of stories towards religious, zonal, and ethnic narratives,” he said.

Yakubu assured that INEC would continue to partner with the media not only as key stakeholders in the electoral process but also as a veritable tool for combating misinformation, fake news, and malicious falsehood in society.

Also speaking, the National President, of NUJ, Chris Isiguzo, represented by the National Secretary of the union, Mr. Shuaibu Liman, said if there was going to be a Third World War, it would start from social media.

He added that as media professionals, journalists need to be careful about carelessly jumping on the bandwagon of emergency journalism which thrives in canvassing support for the political parties of their sentiments using social media.

“Journalists must avoid hate journalism and fake news as these evils can destroy a society.

“The advent of multimedia technology has changed the pattern and flow of communication, globally and since journalism is in the business and practice of communication, it has also impacted upon people tremendously.

“Social media platforms have thrown up challenges and opportunities for the practice of journalism which we encourage journalists and their media organizations to fully embrace.

“Journalists need to avail themselves of the opportunities being provided by Social Media Platforms to provide credible information and reduce the prevalence of hate speech and fake news. This will assist immeasurably in dousing tension in the polity,” he said.

The NUJ president also warned journalists and media organizations against ‘breaking news’ syndrome, adding that the issue is becoming a disease in the journalism profession.

According to him, “because we want to be first with breaking news, we copy and paste any rubbish from the social media and that is the danger.

“As professional media, we should learn to give the other side of the story. If there is breaking news and we are not certain, we should leave it out.

“Or we take another look at it, so that we can provide a source of credible information for those who would listen, read and watch us,” he said.

Oxlade Collaborates With Mayorkun On His New Track 'Bad Boy.'

Marylin Monroe's Wedding Gown Is On Sale For About $1.5 To $2 million!