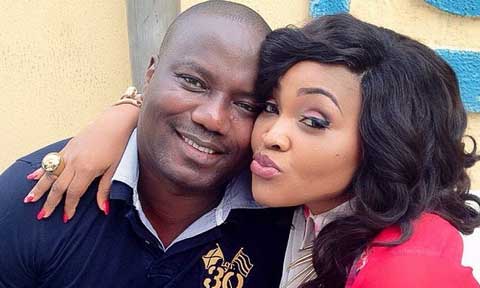 Gentry compares his ex-wife and son’s mother to a dog.

Lanre Gentry, Mercy Aigbe’s ex-husband, has once again shamed her on social media.

While replying to comments from admirers on Instagram, the Lagos-based celebrity dragged his ex-wife to the cleaners.

“Have you seen what the wife wrote that Mercy has been sleeping with Kazeem since Juwon was 5 months old, please go and do DNA ooo,” the follower wrote.

The vehicle dealer accused Kazim’s estranged wife, Funsho, for bringing Aigbe to their home in his answer.

“That is the problem of Adekaz wife [Funsho] and Mercy. When ashawo visit your house what do you expect?” he replied.

Gentry’s remarks come only days after Funsho claimed that Aigbe began sleeping with her divorced husband while she was breastfeeding her child.

“As for you Mercy let’s cut the crap, we were friends, but the shame and your glam lifestyle will not let you admit it, you have been sleeping with Kazim since your son was only 5 months old. I introduced you to Kazim as my friend,” she said.

She also revealed how she invited the actress and her ex-husband to Adeoti’s birthday party when their relationship was at its peak.

“I called and personally invited you and your ex-husband to the 40th surprise birthday party I did for my soon-to-be ex-husband. You were a constant friend of mine back then, I brought you close as a friend because I liked you, but you repaid me by sleeping with my husband Kazim,” she revealed.

Gentry will not be reacting to Aigbe’s alleged adultery for the first time.

Gentry and Aigbe have been at odds since their divorce in 2017.

The auto salesman went on to marry his second wife, Oluwabusola, in September 2021.

Prior to the wedding, Aigbe had asked her son’s father to sign their divorce papers.

Ukraine & Russia Are Set For The Third Round Of Peace Talks