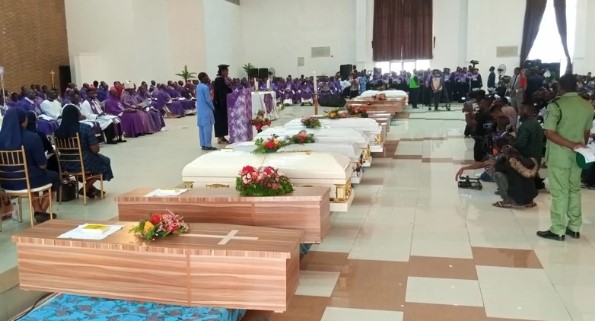 The liturgy began after the procession of Catholic priests into the hall.

The burial mass for the deceased victims has begun thirteen days after the terror attack by gunmen on worshippers at Saint Francis Catholic Church in Owo, Ondo State.

On June 5, 40 people were gruesomely murdered when daredevil gunman opened fire on attendees during a ceremony.

After the caskets containing the corpses of the deceased were brought in, the funeral mass began at 10:00 a.m.

The mass was held at Mydas Resort in Owo, which was packed to capacity, with Governor Oluwarotimi Akeredolu and other prominent figures in attendance.

Following the parade of Catholic priests into the hall, the mass began.

May Their Souls Rest In Peace.