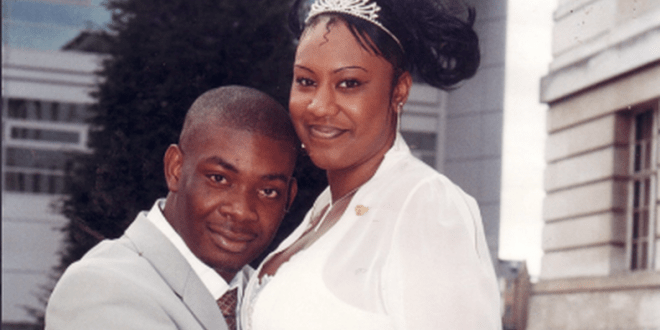 Jackson also acknowledged that age was a role in their unsuccessful marriage.

Michelle Jackson, the wife of Nigerian music entrepreneur Don Jazzy, has disclosed the reason behind their divorce.

The model, who is residing in the United Kingdom, said this during an interview with Nigerian radio station Naija 107.2 FM.

Music, according to Jackson, was the major reason their marriage failed.

Jackson also acknowledged that age was a role in their unsuccessful marriage.

“He just needed to go and be himself and go and do his music. Music got in the way of the relationship. We were very young as well,” she said.

“If I were in the same situation now, it might have been very different.”

They were too young, she said, because she married barely a week after her 22nd birthday.

The model stated that everything changed once JJC Skillz found her spouse.

Don Jazzy, who backed up his story with photos from his wedding, said his marriage to Michelle fell apart because he prioritized music above his family.

Don jazzy stated that he is still in love with my music and that he does not want to marry another and make the same mistakes again.

“For so long, everyone keeps asking me when am I getting married? Well, the truth is almost 18 years ago, I was 20 and I got married to my best friend Michelle @yarnstaswitch and it was beautiful,” he wrote.

“I loved love and I loved marriage. Michelle is soooo beautiful inside and outside with such a soft heart. But then, me being so young and full of dreams, I went and messed it up cos I was giving all my time to my music.”

Don Jazzy is a record label owner, music producer, and businessman from Nigeria.