Home > News > Vicente Fernandez, The ‘King Of Rancheras,’ Has Died At The Age Of 81 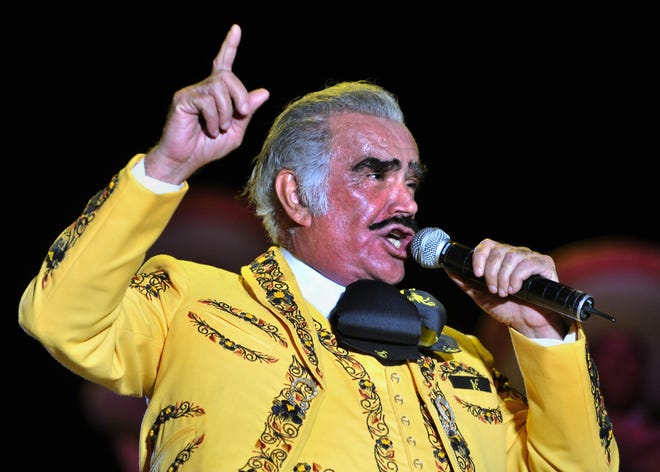 In August, Fernández was hospitalized after falling at his ranch Los Tres Potrillos, just outside of Guadalajara

His family said in a statement that he died in Guadalajara, Jalisco, México, four months after being hospitalized and diagnosed with Guillen-Barré syndrome.

In August, Fernández was taken to the hospital after a fall at his ranch Los Tres Potrillos, just outside of Guadalajara, where he lived after retiring from the stage but not from the music industry, as he continued to record and produce albums.

He stayed in the hospital’s intensive care unit, where he was receiving treatment and was hooked up to a ventilator, until his family learned of his death.

Fernández sent a message on his Instagram account before his operation in August that moved his admirers but also raised concerns.

“Don’t give up on your dreams. Dedicating my life to singing was the best decision I could have made,” the singer wrote, finishing off with “Chente sigue siendo el rey,” an ode to his song that well established him as the “King of Rancheras.”

Many Latin American celebrities, including Lucero, Gloria Estefan, and Ricky Martin, have expressed their condolences on social media following his death, thanking him for his contributions to the music industry.

Chente released over 100 albums, sold over 70 million copies, starred in 34 Mexican films, and written over 300 songs.

He went on to produce outstanding singles such as “Volver, Volver,” “Por Tu Maldito Amor,” “Hermoso Cario,” and “El Rey,” a song that more than lives up to his title of King of Rancheras.

He said his goodbyes to the stage at Azteca Stadium in México City during a free farewell show in 2016.

After that, he went back to his house and never stopped making music.

Fernández is survived by his wife Cuquita Abarca, his four children Vicente Jr., Gerardo, Alejandro, and Alejandra (his niece, whom he always considered his daughter), nine grandchildren (four children of Vicente Jr. and five of Alejandro) and four great-grandchildren.