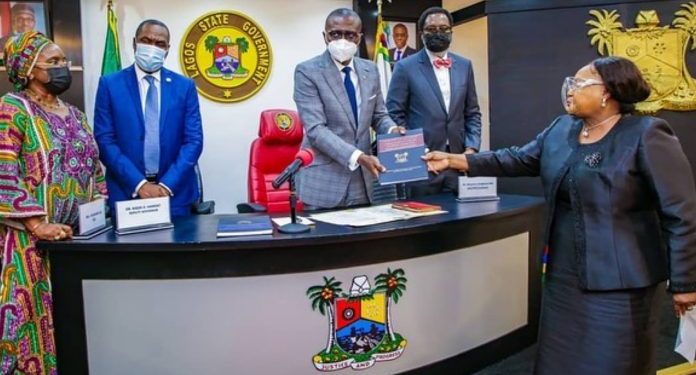 The report of the four-member team is expected in two weeks.

Governor Babajide Sanwo-Olu has appointed a four-member panel to draft a white paper on the Judicial Panel of Inquiry on Restitution for SARS Victims and other matters.

On Monday, November 15, 2021, the judicial panel delivered its report to the governor, more than a year after it was established to investigate public allegations against the Nigeria Police Force’s now-defunct Special Anti-Robbery Squad (SARS).

On the night of October 20, 2020, the panel was also tasked with reviewing reports that security personnel shot and injured multiple protestors who were rallying against police brutality.

The panel’s chair, retired Justice Doris Okuwobi, presented the governor with two reports, promising that they would lead to reconciliation and restitution.

“We will ensure that the recommendations that are coming out that will be turned into a white paper and would be made available to the public. We will do it appropriately so that history will judge us well and we will have a document that will stand the test of time,” he said.

The panel will be led by Moyosore Onigbanjo (SAN), the Lagos State Attorney-General and Commissioner for Justice, with members including Segun Dawodu, Commissioner for Youths and Social Development; Aramide Adeyoye, Special Adviser, Works and Infrastructure; and Tolani Oshodi, Permanent Secretary, Cabinet Office.

Within two weeks, the panel is expected to submit its report.

'There Was An Attempt To Cover Up' The Lekki Shooting, Says Lagos Judicial Panel