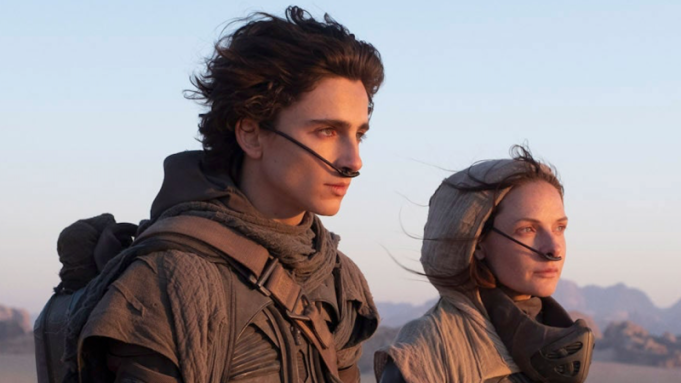 An adapted screenplay that is designed to condense a five-book tale about religion, messianic figures, environmentalism, power, and violence.

Given the film’s two-hour plus run time, it’s reasonable to anticipate that all stages of plot progression will be examined. Dune, on the other hand, finishes with the audience clamoring for more as the plot progresses, undoubtedly setting the stage for a sequel.

The story revolves around Paul Atreides (Timothy Chalamet), the sole heir to the planet (Atreides), which is part of a multiverse Arrakis united under the cold reign of ‘The Emperor.’ His father (the monarch) and two of the most proficient fighters, Atreides Gurney Halleck (Josh Brolin) and Duncan Idaho, are grooming Paul (Jason Momoa). Apart from that, Paul has been initiated into the mystic practices of his mother’s sisterhood, the ‘Bene Gesserit.’ So that he can become the Lisan al-gaib, which translates to “off-world prophet.”

Paul must fully grasp a rare ability to control people’s thinking into supporting his will and interpret his dreams about his people’s past, present, and future in order to fulfill his political and spiritual destiny.

In a conversation between Paul’s mother and the head of the Bene Gesserit coven, the genesis of Paul’s uncommon supernatural gift, referred to as “the voice,” is briefly described. The two spoke about how tough it was to create a child with enough power to help them achieve their hidden purpose, which, in their words, “will guide the world into a golden path of utopia,” a better future.

After a series of visions lead him to meet the ‘Fremens,’ the inhabitants of the Arrakis desert, Paul’s campaign becomes clear. A voice speaks during Paul and Jamis’ confrontation, expressing a prophecy that foreshadows the transformation from naive prince to ‘Kwisatz Haderach.’ Paul’s mother admits that her son has never killed anyone while the two men fight to the death. This could support the idea that the death mentioned in the prophesy is only symbolic. That by staining his hands with blood, he transforms into someone else: The Kwisatz Haderach, a warrior who waged wars across planets in order to reach the main enemy in Dune’s multiverse, “the emperor.”

The continual use of visions to clarify the overall plot is one key factor capable of throwing the audience off amidst the fights, flights, and inter-planetary politics. Despite this, these visions are not fully trustworthy. Paul is asked about this in the 1984 version, and he confirms it. Another character who comes frequently in Paul’s strange visions is Chany (Zendaya), a mystery girl from Arrakis who would either become his sweetheart or his killer. A vision of the two youths kissing before Channy plunges a knife into Paul’s chest foreshadows the romantic or deadly narrative.

There are also scenes of blood trickling from Channy’s hands as she holds the sword she gave Paul before he dueled Jamis. This is Dune, after all, and the visions may be significant.

Despite his mother’s wishes for them to be taken off-planet for safety, Paul, or should I say Kwisatz Haderach, chooses to stay and fight against the emperor’s crusade in defense of the desert people and to avenge his father’s assassination by the Harkonnens.

Part two theories could include any or all of the following: a full-fledged civil war, Paul’s deeds as the Kwisatz Haderach, his and Channy’s love story, as he and the fremans struggle to prevent a dreadful but unavoidable future that he has witnessed.

Dune will have a sequel because of its expansive storyline and visual appeal. Even still, it’s strongly advised that you re-watch it as many times as you want before then, because this film worth every second it takes.

'Extraction 2':Everything We Know So Far About The Action Sequel

Rema’s ‘Calm Down’ Surpasses 1 Billion Streams Across All Platforms