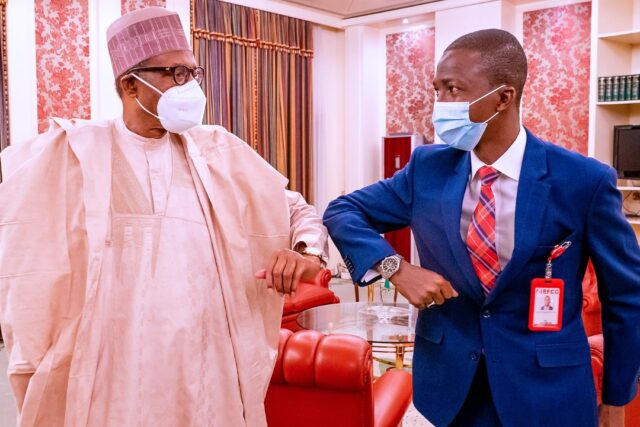 The President praised the EFCC’s leadership for winning 2,220 convictions in less than a year and recovered over N152 billion and $385 million.

The revised Operating Procedures of the Economic and Financial Crimes Commission were unveiled by President Muhammadu Buhari on Friday, March 25, 2022. (EFCC).

The President, speaking during the unveiling of the EFCC Standard Operating Procedures, Policies, and Manuals at the State House in Abuja, cautioned the commission’s heads and other operatives to avoid being swayed by political players for personal gain or to score political points.

“I must advise the leadership and operatives of this commission to resist the temptation of being used for partisan politics or be dragged into personal disputes. Your job is to serve the nation in its efforts to entrench good governance,’’ he said.

The President praised the EFCC’s leadership for winning 2,220 convictions in less than a year and recovered over N152 billion and $385 million.

“Ladies and Gentlemen, I am glad to note that the war against corruption, which is one of the cardinal objectives of this administration, is being strengthened through the institutionalization of operational procedures particularly as they form the building blocks of transparency and accountability in administration and public expenditure,’’ he said.

President Buhari also praised the EFCC Chairman, Abdulrasheed Bawa, for his efforts to further institutionalize the commission by developing 26 Standard Operating Procedures and 25 Policies and Manuals for the Commission’s Departments, Units, and Staff, and thanked the Board, Management, and Staff for their support.

The Chairman of the EFCC stated in his remarks that the institution was through several phases of changes to reposition it for the role of combating financial crimes in the country, including the development of policies and manuals.

The chairman expressed gratitude to the President and the National Assembly for their trust in his “ability and competence” to head the organization in 2021.

Bawa said the EFCC’s departments, including intelligence gathering, training, and academic institutions, had been reorganized and upgraded to meet the demands of the job, and that a software had been developed for operations, as well as a mobile app called “The Evil Eye” that could be used to report economic and financial crimes from the comfort of one’s home.

He stated that the EFCC already had a five-year strategic plan in place for the years 2021-2025, with clear and measurable targets based on five objectives, including improving public engagement in crime prevention, systems and processes for prevention, intelligence gathering, prosecution, and law enforcement.

Chris Brown’s Rape Accuser Texted Him Days After The Incident