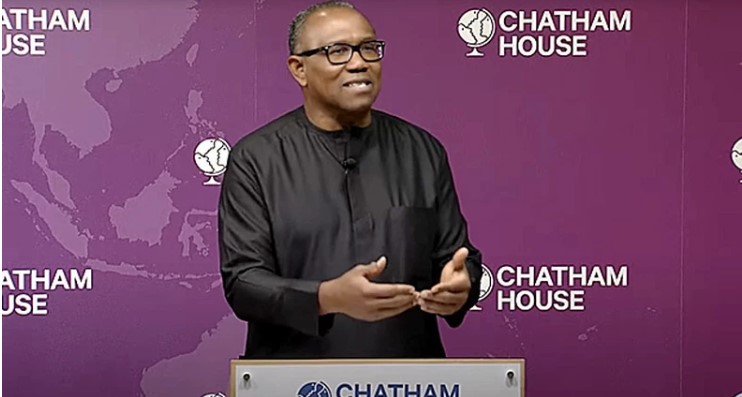 The UK agreed to Nigeria’s categorization of IPOB as a terrorist group in May 2022.

The Presidential candidate of the Labour Party, Peter Obi says it’s not enough for anyone to condemn the activities of agitators in the country but also look at what led to their agitations.

Obi while speaking at Chatham House on Monday, January 16, 2023, said he has condemned the activities of all agitators, who are killing and destroying properties in the country to press home their demands.

The LP candidate said this while responding to a question on his alleged refusal to condemn the activities of the Indigenous People of Biafra (IPOB) in the southeast.

In 2017, the Federal Government proscribed IPOB and in May 2022, the Government of the United Kingdom accepted Nigeria’s classification of IPOB as a terrorist organization.

Many Nigerians believe Obi shies away from speaking against the proscribed group whose main reason for agitating is to achieve the separation of the southeast from Nigeria.

This belief was seemingly strengthened on on Sunday, January 15, 2023, when the presidential candidate listed ISWAP and Boko Haram as terrorist groups and omitted IPOB from the list.

However, Obi maintained that he has always condemned all agitators including IPOB which has on several occasions been accused of killing and destroying properties in the southeastern part of the country.

He said, “You are not following me, even yesterday, I spoke about Biafra being ended 53 years ago. It’s all over the place in the space. I condemned all agitators but in condemning them, you have to look at what brought about these agitations all over the place. So, we have IPOB, we have the Yoruba Nation movement, we have all sorts.

“When you have created this level of massive poverty, where 63 percent of your population is poor, you’re going to create all sorts of problems. I was speaking to a British minister this morning, I said we have about 40 percent unemployment, about 60 percent youth unemployment, young people in their productive age doing nothing, if you have 15 percent unemployment in Britain today, you’re going to have massive agitation. Nobody will be able to leave his house”.

He further explained that leadership failure in Nigeria was responsible for agitations in many parts of the country.

“What you have seen is a cumulative effect of leadership failure over the years, which will be solved by good governance, When people start seeing justice, fairness, and inclusive government and doing the right thing, all those things will start reversing itself (sic)”. he said.

Obi’s presidential candidacy enjoys the followership of many Nigerian youths who refer to themselves as Obidients.

Tems Set To Receive Another RIAA Certification For 'Higher'

M.I Says Nobody Has Toiled For Hip Hop In Nigeria Like He Has