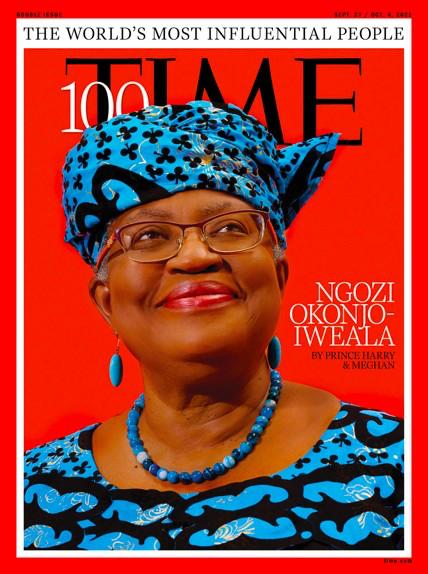 Nigerian women are once again represented globally as Ngozi Okonjo-Iweala makes the list in Time magazine’s top 100 most influential people in the world.

The nominations for the Time top 100 comes from the Time alumni (those who have been listed before) and the magazine’s international staff, but the final list is exclusively chosen by the Time editors.
Ngozi Okonjo-Iweala was nominated by Prince Harry and Meghan Markle the Duke and duchess of Sussex and here’s what they had to say about her “Okonjo-Iweala has shown us that to end the pandemic, we must work together to equip every nation with equitable vaccine access “ – powerful statement from a powerful and wonderful woman.

Okonjo-Iweala who was recently appointed Director-General of World Trade Organization (WTO) is not only the first woman, but also the first African to lead the WTO. In this publication, she was included in the leader’s category alongside the likes of Joe Biden- President of the United States of America , Kamala Harris- Vice President of the United States of America, Xi Jinping- President of China and Narendra Modi – the Prime Minister of India.

She is Nigeria’s former Minister of Finance.

Other Africans that made the list are; Angelique Kidjo of Benin, Felwine Sarr of Senegal, Phyllis Omido of Kenya, British actor Daniel Kaluuya of Uganda, Elon Musk of SouthAfrica, John Nkengason of Cameroon, Sara Menker of Ethiopia and French born actor Omar Sy.
Some Nigerians made the list in 2020 including, Tony Elumelu, Tomi Adeyemi, Giannis Antetokounmpo and Tunji Funsho.

Will You Watch Scary Movies For $1,300? Here's Your Chance