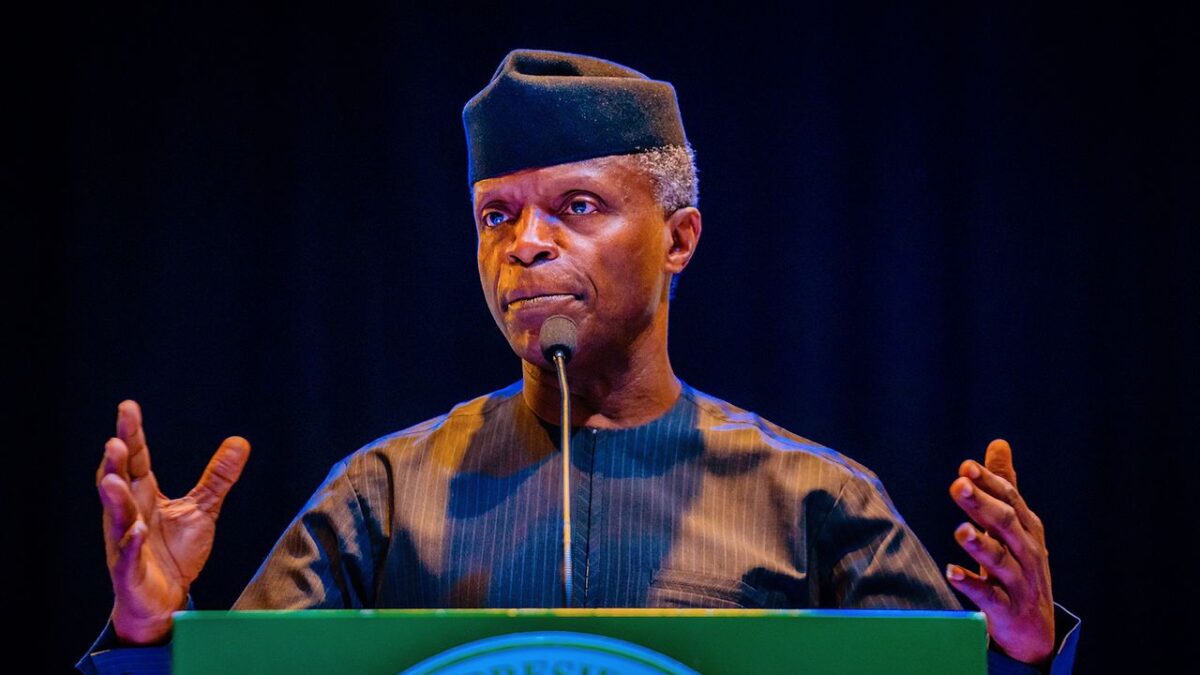 Vice President Yemi Osinbajo has been named the Leadership Person of the Year for the year 2021.

“Resetting Nigeria: Culture, Politics, Geography, and the Role of Big Ideas,” as the Leadership Group’s event is titled, is the topic.

The vice president expressed his gratitude to the Chairperson and Management of the Leadership Group for recognising him as deserving of the honour in his acceptance speech.

“ I am also very privileged to share this award of Leadership Person of the year with Okonjo Iweala, a globally affirmed finance and development expert, and a true Nigerian patriot who is now the Director General of the WTO.

“ Every glass ceiling she has broken, and they are many, has inspired girls and women all over the world to reach for the highest heights in all fields of human endeavour.

“The late Sam Nda-Isaiah, Founder, Leadership Group, was a dogged achiever who stood for integrity in public life and embodied the finest traditions of Nigerian journalism.

“He believed fervently in the role of the media as an umpire of public discourse and in its mission of elevating the quality of public debate.

“I am gratified that the values he lived by continue to be ardently represented by this organization.’’

Mrs. Zainab Nda-Isaiah, who leads the Leadership Management Team, was praised by Osinbajo for pushing on in the aftermath of Nda-transfer Isaiah’s to glory.

He described the late Ndah-Isaiah as a progressive who believed in a society that was peaceful, just, and productive.

“Those of us who, like, Nda- Isaiah belong in the same political tendency — the one that is loosely described as the progressive, agree on certain principles.

“That we must create a country that works for all of us – a peaceful and secure society founded on law and order and the rule of law, a society that enables commerce and values productivity , so that large and small businesses can grow and provide jobs and opportunities for young people.

“A society where no one is left behind, providing by means of an effective social welfare scheme a safety net for the very poor and the vulnerable.

“A united and tolerant nation, where all, irrespective of ethnicity, religion or political persuasion are respected–treated fairly and justly and have equal access to all opportunities.

“ That we must build a Nigeria where a boy or girl does not say I am from the South-West , or I am from the North-West, or South-South or North-East, or North-Central or South-East, but I am a Nigerian, a citizen of one of the greatest and most prosperous nations on earth.’’

The award was dedicated by the vice president to all Nigerians working to establish a unified, peaceful, and successful country.

“I therefore dedicate this award to the millions of Nigerians who believe in this new Nigeria; and who retain faith in our possibilities as a people and are doing their best every day in their various corners to build this nation through honest endeavor.

“I dedicate it to those people of goodwill who are working hard to promote peace, tolerance and mutual understanding within their communities.

“To those working hard to build bridges across communities and have refused to be frustrated and wearied by the trials of our country as it begins to grow into the fullness of its manifest destiny.

“It is because of such Nigerians, that despite the onerous challenges we are passing through on our march of progress that I am certain that we will build this great Nigerian nation we all yearn for.

“Once again, I thank the management of leadership for this award I congratulate all awardees for their well deserved recognition,’’ he said

The Etsu Nupe, Yahaya Abubakar, handed the award plaque to the vice president.

Other categories of prizes were given to meritorious Nigerians.