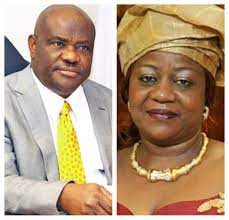 President Muhammadu Buhari’s appointment as INEC national commissioner, according to Governor Nyesom Wike, is part of the APC’s big plans to rig the 2023 elections.

“Despite the outpouring of opposition to her nomination and widespread doubts about her ability to stay impartial, it appears that the APC-led Senate is set on confirming her appointment as part of their big plan to rig the 2023 general elections far ahead of schedule,” Mr Wike alleged.

He also warned that appointing Ms Onochie, a former member of the APC, would exacerbate INEC’s credibility problems. Last October, she was nominated as an INEC commissioner.

“As a governor and concerned Nigerian who cares deeply about this country and wants our democracy to survive,” Mr Wike said, “I would like to ask to Mr President to withdraw Miss Onochie’s nomination for the sake of legacy and restore trust in our election system.”

Ms Onochie, who came before the Senate committee on INEC on Thursday, denied being a member of the APC.

“Since Buhari was re-elected as president for a second term, I’ve tried to stay away from politics. I haven’t had anything to do with politics since 2019. She informed the committee, “I am not a member of any political party in this nation as I sit here.”

“Based on some of the documents I’ve had the privilege of seeing, both her British citizenship and her membership in a political party until 2019, if we believe she’s been disengaged from the party since 2019, you’ll try to avoid appointing such people to the electoral commission because it could cause controversy,” Mr Jega stated.

“To be honest, the president can just withdraw her nomination,” he continued. After all, in Delta and Cross River states, there are plenty of other women with credibility, capacity, and competence.”