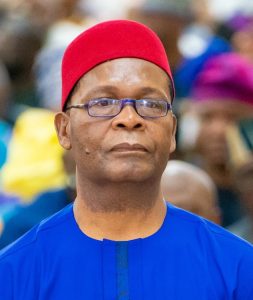 Igbokwe claims that the invaders’ activities were caught on closed-circuit video (CCTV) at his home.

Joe Igbokwe, the Special Adviser on Drainage and Water Resources to Lagos State Governor Babajide Sanwo-Olu, has accused members of the Indigenous People of Biafra (IPOB) of setting fire to his residence in Nnewi, Anambra state.

In a Facebook post, Igbokwe claimed that IPOB members broke into his home on Sunday, October 3, 2021, but that no one was killed.

He also stated that the attackers’ activities were caught on closed-circuit video (CCTV) in his home.

He wrote; “IPOB invaded my house in Nnewi about now. I am sure they (razed) down my house, (given) the jerrycans of petrol I saw being offloaded from their Sienna car via CCTV. To God be the glory. I am still alive.”

The lawmaker also posted a video from the aftermath of the incident, along with the comment “Here it is. My Home in Nnewi has been sacrificed. No life was lost. To God be the glory.”

The APC leader, on the other hand, removed the post from his Facebook page just hours after sharing the video on the social media site.

Over 1 Billion Votes Were Recorded On BBNaija's 'Shine Ya Eye'

Whitemoney Wins The 'Shine Ya Eye' Season Of BBNaija 2021