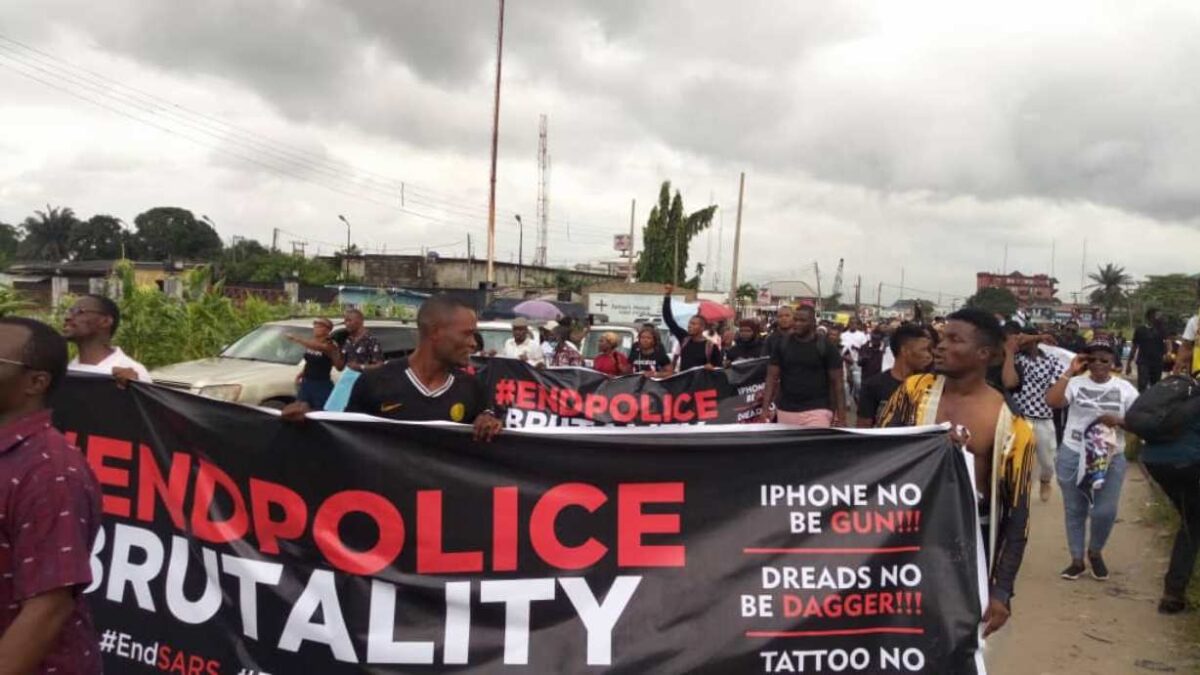 Hundreds of youths took to major streets in Benin to mark the first year anniversary of the EndSARS protest.

The News Agency of Nigeria (NAN) reports that they had converged at the Oba Ovonramwen Square, popularly called Ring Road, with placards bearing various inscriptions demanding for automatic employment for the victims of the protest in the state.

They also demanded for the immediate implementation of the report of the judicial panel that was setup by the state government, requesting that all those still in detention as a result of the 2020 protest should be released unconditionally.

Security personnel drawn from the Nigerian Police, Department of State Services (DSS), Nigerian Security and Civil Defence Corps (NSCDC) and members of local vigilante were on ground to ensure peace.

NAN reports that members of the Public Works Volunteers (PUWOV) were also at hand to control traffic, while the peaceful march lasted.

Asekhame who is from Uhonmora, Owan West Local Government Area of Edo, said he was amputated after he was hit by a bullet during the protest.

“During the protest last year on the 19th of October 2020, we in Auchi decided to hold our own peaceful protest, on that day and during the protest, soldiers ran into us and I was hit by a bullet that led to the amputation of my left leg.

“I was a student then but now I am a graduate and I am supposed to go for service next Sunday.

“I presented my case before the panel through my lawyer, but till now, we have not heard anything from the panel,” he said.

On his part, Ailenokhoriah who was accompanied by his mother, said they were protesting at the Market Square in Ekpoma when a policemen, he identified as Sgt. Ade, shot him.

According to him, “himself (Ade) and other policemen with him started beating me and they said if I die, I will be buried behind the police station.

“I was later sent to the hospital where I spent three months and now we have resorted to traditional treatment, but since then, I have not been able to stand up.”

Corroborating his narration, his mother, Betty Odiagbe, said that they also sent a petition and appeared before the panel but nothing had come out of it.

She lamented that she had spent all her resources trying to take care of her son and that had made it impossible for her to pay the school fees of her other children.

One of the organisers of the anniversary rally, Kola Edokpayi, said: “I want the state government to implement the recommendations of the panel.

“The federal government should make 20th of October every year, as a public holiday to commemorate the EndSARS protest and give respect to the fallen heroes.

“These ones here who have been injured should be given automatic employment”, he added.