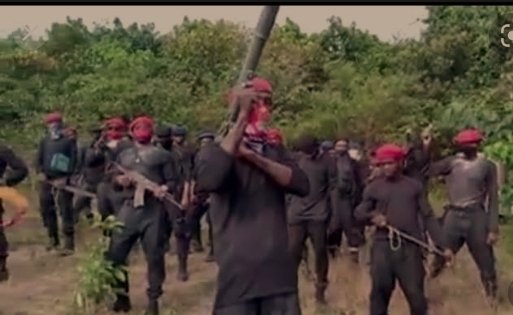 Four alleged members of the banned Indigenous People of Biafra’s Eastern Security Network, ESN, were paraded in Imo State yesterday while planning to detonate explosives at a military checkpoint along the Owerri/Orlu route.

Abutu Yaro, the State Commissioner of Police, verified this to reporters in Owerri.

They were captured, according to Yaro, when ESN members attacked security personnel in a gunfight and were defeated by the police force’s overwhelming force.

The Commissioner of Police went on to explain how they were apprehended, saying, “On July 4, 2021, several members of the prescribed ESN/IPOB Organization were detained by security forces in the state.” They were apprehended after a failed attempt to detonate homemade bombs at a military checkpoint on the Owerri Orlu Road.

“However, the joint security agencies engaged the hoodlums in a gun battle, which resulted in the arrest of the following suspects: Chukwuebuka Offorji “Male,” Nicholas Ekwelem “Male,” Okwelem Paschal “Male,” and Onyekahi Enerenini “Male.”

“However, during the struggle, one of the suspects received a gunshot wound to his leg. Meanwhile, the Command’s spies are on the lookout for the fleeing suspects, who are said to have escaped with gunshot wounds. The group’s arms, as well as other incriminating materials, are now being recovered.

“The Commissioner of Police in Imo State, CP Abutu Yaro, FDC, has vowed to maintain operations and arrest of all criminals involved in violent crimes in the state, particularly as the Command has embarked on mop-up operations to arrest the remnants of the ESN/IPOB members in the state, a feat that has heralded peace and tranquility in the state recently.”

“Peace-loving residents of Imo State should continue to help the Police with genuine information on criminal elements’ activities in their neighborhoods,” he said. We will continue to work together to maintain Imo State secure for business to thrive.”

Wizkid's 'Essence' Made it to Apple Music Top 50 Song Chart