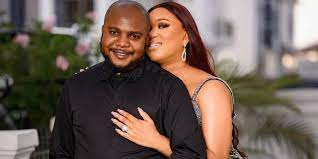 Thompson says he gave Sandra’s belongings to his sister and warned her not to come back to his house.

Thompson stated that he could no longer handle the marriage due to Iheuwa’s behavior.

On Sunday, January 9, 2022, the billionaire released a series of pictures on his Instagram Stories outlining many reasons why their marriage failed.

He further revealed that Iheuwa accused him of marrying her because she was a Green Card holder.

Thompson stated that he had already removed her belongings from his home and had warned the estate security officers not to allow her to return.

In another twist, there are rumors that Thompson’s infidelity caused the marriage to fail.

Thompson began cheating on Ihuewa soon after they returned from their honeymoon, according to blogger LIB.

In 2021, Thompson and Iheuwa married in a lavish wedding ceremony.

They are expecting their first child together.