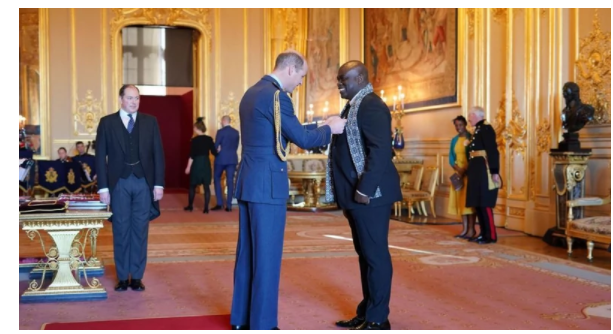 The singer joins a long line of Nigerians who have received the award.

Muyiwa Olarewaju, a British Nigerian gospel singer, has been granted an OBE in the Queen’s Birthday Honours List 2020.

Muyiwa Olarewaju, a BBC One talent show judge, radio broadcaster, and award-winning British gospel singer, was given an OBE in the Queen’s Birthday Honours List 2020.

The enthusiastic singer is a star of Songs of Praise’s Gospel Choir of the Year, which airs on television.

By fusing traditional gospel music with sounds from Africa, the Caribbean, and Asia, as well as soul, R&B, and pop, he has helped to popularize gospel music on a worldwide scale.

Given the award for his contributions to music, Muyiwa has traveled alongside giants like as Stevie Wonder and Mariah Carey, bringing his distinctive approach to music lovers all around the world.

He’s collaborated with legends like Bob Dylan and Lauryn Hill.

On the 12th of January 2022, Prince William presented Muyiwa with the OBE medal.

Blaqbonez Releases Music Video For ‘Back In Uni’