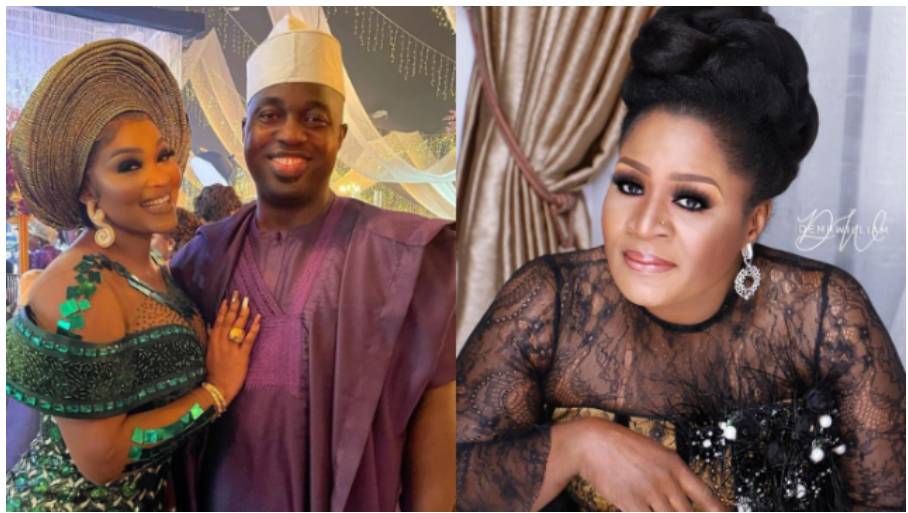 Mercy Aigbe, a Nollywood actress, and her new husband, Kazim Adeoti, have both been warned by his former wife, Funsho.

On Sunday, May 8, 2022, Funsho used her Instagram Stories to give a severe warning to her estranged husband and his new bride.

“realmercyaigbe and @adekazproduction for the last and final time stop pushing me. Kazim do the needful. Pull it down. You’ve been warned. 12 hours only,” she wrote.

The images were shot shortly before the new couple went out to celebrate Ini Edo’s 40th birthday.

Since the pair’s wedding earlier this year, Funsho and the newlyweds have been at odds.

She called Aigbe out weeks after she agreed to an interview in which she denied ever knowing her before their marriage.

“Let’s get the record straight here, this post is regarding an interview recently going around by Media Room Hub with my soon “to be” ex-husband in one of his numerous lies, I want you all to know that in contrary to what Mr. Adeoti said I did NOT and will NEVER SETTLE to have a second wife in my marriage to him,” she wrote.

“As for you Mercy let’s cut the crap, we were friends, but the shame and your glam lifestyle will not let you admit it, you have been sleeping with Kazim since your son was only 5 months old. I introduced you to Kazim as my friend.”

She further said that when they were dating, she brought the movie star and her ex spouse to Adeoti’s birthday party.

In January of 2022, Aigbe married Adeoti.

Aigbe has a son with Lanre Gentry, an auto salesman.

Davido Throws A Big Birthday Bash For His Second Child.