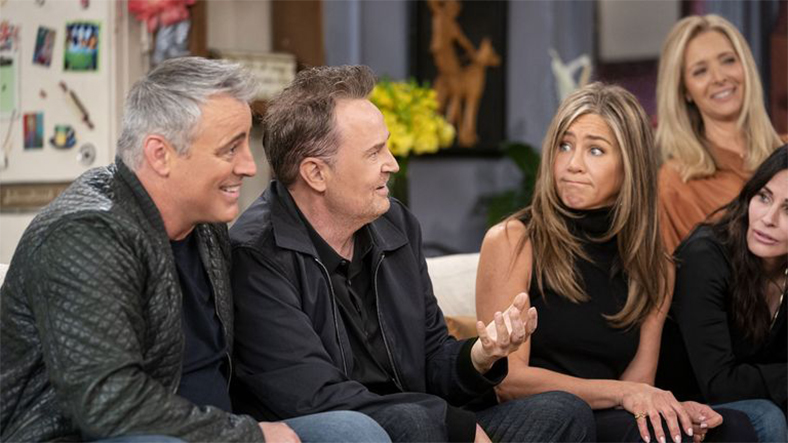 Friends met for a belated reunion to commemorate the twenty-seventh anniversary of the original show’s launch earlier this year.

Jennifer Aniston, Courteney Cox, Lisa Kudrow, Matt LeBlanc, Matthew Perry, and David Schwimmer gathered with James Corden, David Beckham, and Justin Bieber to revisit show sets, meet with guests who once appeared on the series as celebrity guests, and perform table reads and re-enactments of the most iconic episodes.

Aniston discusses the emotional impact of appearing on the program in a recent interview with The Hollywood Reporter, claiming it was “harder than expected.” In her own words:

“Time travel is hard. I think we were just so naive walking into it, thinking, ‘How fun is this going to be? They’re putting the sets back together, exactly as they were. They get you there and it’s like, “Oh right, I hadn’t thought about what was going on the last time I was actually here.” And it just took me by surprise because it was like, “Hi, past, remember me? Remember how that sucked? You thought everything was in front of you and life was going to be just gorgeous and then you went through maybe the hardest time in your life?” It was all very jarring and, of course, you’ve got cameras everywhere and I’m already a little emotionally accessible, I guess you could say, so I had to walk out at certain points. I don’t know how they cut around it.”

Following the show, the actress discussed her career ambitions, describing her ambitions as “shape-shifting”:

“That was what was jarring, that we all had an idea of what the future was going to be and we were going to go hunker down and focus on this or that and then it all just changed overnight, and that was it. But again, everything’s a blessing if you’re able to look at life’s ups and downs in that way. And if it all hadn’t happened, I would not be sitting here the woman that I am.”

Aniston is starring in The Morning Show, an Apple TV+ drama about a popular New York City breakfast news program.

Waje and Tiwa Savage Collaborate On New Single “All Day”