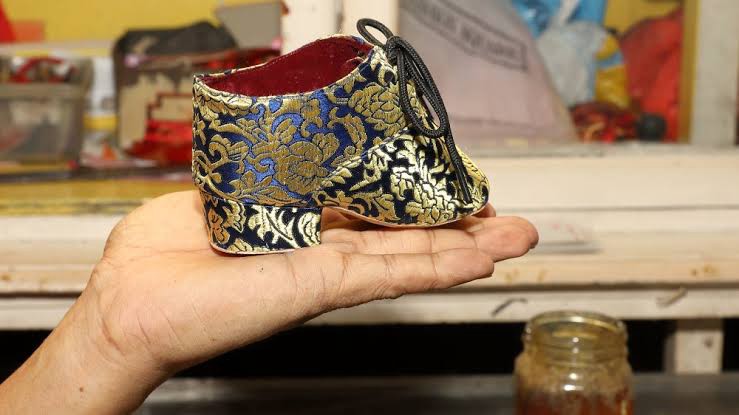 The first time I heard about this was in a book of Chinese history I read some years back. Then, I wasn’t so keen on search engines so I didn’t bother to look it up to learn more. In this new book I’m currently reading, “Snow Flower and the Secret Fan” by Lisa See, the images conjured by the words were so vivid that I had to go look it up and see for myself that my imagination was not just in overdrive. It was nothing like I imagined. Take a look for yourself in the pictures in this article.

Foot binding is an ancient Chinese custom of applying tight wrappings to the feet of young girls, usually at the ages of 6 and 7, to modify their shape and size. The purpose of this was to make their feet as small as possible which was considered to be an attractive quality. The shape of the feet was made to look like a Golden Lotus; a kind of flower.

Girls with bound feet were usually from families of wealth and high social status who could afford to have one less hand to help out on the farms. Girls with normal feet were usually slaves or from families who could not afford to have them incapacitated, for economic reasons. Foot size determined how marriageable a girl was. Small feet proving to prospective in-laws that the girl was disciplined and able to endure the pain of childbirth. How depressing!

The pain felt when the bones are crushed and the skin around the feet are rotting is not one I can describe since I’ve never felt it before. The description in the books and articles I’ve read on the subject is enough to make my feet ache. For months, girls with bound feet were stuck inside, practicing walking on their tiny feet while enduring so much pain.

Women with bound feet were more likely to fall, less able to squat and less able to stand up from a chair without assistance. They could not walk long distances and could not run. The only “positive” aspect of this practice was that they would be married into families of great wealth. The negative effects of this practice are so overwhelming (in fact I can feel my toes tingling right now) that I can not imagine why anyone would want to subject their daughter to such an excruciating process.

An alarming 1 out of 10 girls died from Foot Binding. This figure is head to head with Female Genital Mutilation and like FGM is yet another example of a cultural practice that objectifies women, dehumanizing them and subjecting them to pain beyond words.

Thankfully, this culture was banned in the early 20th century and is no longer a criteria for beauty or value for women in China of in any part of the world. Whew!