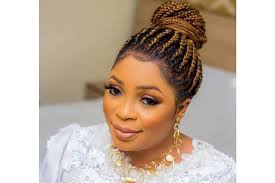 Afolabi says she has lupus.

Kemi Afolabi, a Nigerian actress, has stated that she only has five years to live.
During a recent interview with Chude Jideonwo, the movie actress revealed this.

Afolabi claims she has an incurable illness and has already survived one year of the five years doctors said she would live.

Afolabi quoted her doctor as saying, “Make sure you are with your loved ones. At least, you still have up to five years.”

“I have lupus. It’s not curable. You just have to take medications for the rest of your life,” she said.

She stated that she spent N1.2 million on a therapy that did not work since she was in constant discomfort.

In January, the actress revealed how she had made her will following her cancer diagnosis.

“I wrote my will and booked a space with ebony vault this year 2021 but God showed me how faithful he is despite my unfaithfulness,” she wrote.

“Who am I that God is so mindful of my existence? Me ordinary sand? That was toss around from my private hospital to LASUTH, to Army barracks hospital WAEC and finally LUTH where I spent over three months!”

The actor, who is 43 years old, is married and has a child.