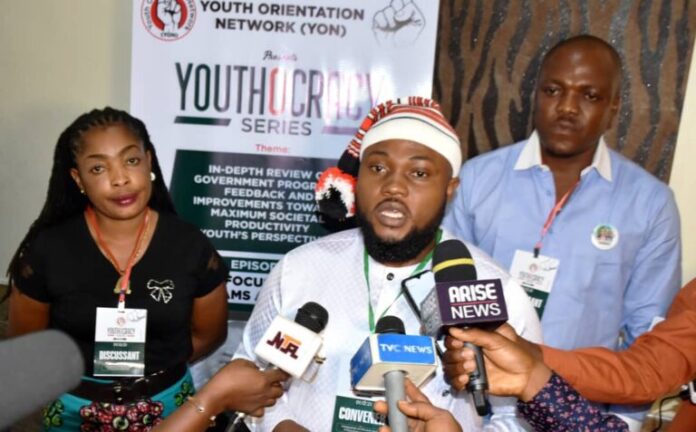 The Special Adviser to the Governor of Enugu on SME, Development, and Investment Promotion, Hon. Arinze Chilo-Ofiah, advised the young to empower themselves via skills and start small enterprises.

The youngsters of Enugu State have shown their willingness to scrutinize the conduct of young people appointed or elected to public posts in the state through the ‘Youth Orientation Network’ YON, a newly formed platform.

They stated they will interact with public office holders through their engagement series, ‘YOUTHOCRACY,’ where they will inform the people what they’re doing to improve their lot in society.

Comrade Prince-Will Ugwu, the network’s Convener and Director General, stated that the goal of the YOUTHOCRACY series is to create an accountable platform where young people, leaders of youth organizations, and civil society organizations from across the state can critically, diplomatically, and constructively engage the government directly on all of the government’s programs for the people, particularly the youths.

“It gives us joy that at last, Enugu youths have become the first in Nigeria to initiate issue-based direct interface with peers and young persons in governance thereby, saying no to the menace of praise singing without merit and embracing public accountability as the only way to ensure that youths in leadership do not become worse than some of the old folks in high places.

“In this Episode 1 of Youthocracy Series, 255 Delegates drawn from 51 Youth, Students and Civil Society Organizations across the state, placed the Enugu SME Center under public scrutiny in order to discuss the theme; in-depth Review of Government Programs, Feedback and improvements towards maximum societal productivity: youth perspectives.

“We thank the Special Adviser to the Governor on SME Development and Investment Promotion, Hon. Arinze Chilo-Offiah who also doubles as the DG of Enugu SME Center, for honoring our invitation to give account of what the Enugu SME Center have been able to achieve so far through thier numerous programs and to address all lingering issues and misconceptions about Some SME Programs.

“We remain grateful and loyal to all Youths, Captains of Industries and Organizations who supported us immensely in cash and kind in order to actualize this goal. The journey to a greater Enugu State has just begun!”

The Convener added that the series is a confluence of 255 Delegates from 51 Youths, Students, and Civil Society Organizations in the state, and that the first episode would focus on what the Enugu Small and Medium Enterprises, SME, is all about.

Ugwu also praised the Governor of Enugu State, His Excellency, Rt. Hon. Ifeanyi Ugwuanyi, for following through on his promise in his inaugural address that his second term in office will be solely dedicated to the youth.

Chilo-Offiah added that the Enugu SME Centre has always been dedicated to aiding small company owners and students in the state to obtain the essential intervention and assistance via grants and zero-interest loans, and also spoke about the vast variety of operations of the organization.