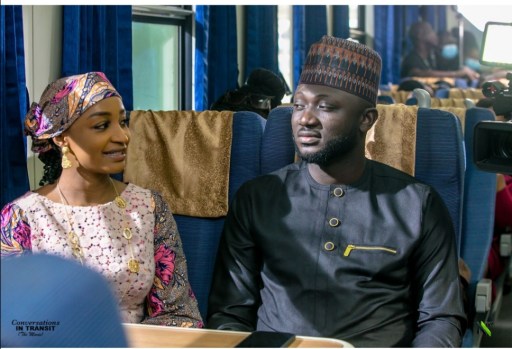 The entire movie was shot aboard a moving train.

Actor Alexx Ekubo, who plays a supporting role in the film, confirmed the completion of production with an Instagram post praising the filmmaker and the project.

“Let me add, attempting to shoot a film entirely on a moving train in Nigeria is utter madness. What @rogersofime & the entire cast & crew of @citthemovie are doing is nothing short of a Mad War Miracle, & I’m glad to be part of the gladiators.”

‘Conversations in Transit,’ directed by Robert Peters and written by Ummi Baba-Ahmed, Tope Bolade-Akinbode, and Dichie Enunwa, follows an heiress, Hajara, an event planner, Ini, and a career woman, Adeola, on a train voyage. As they come to terms with their terrible circumstances, the three females must make decisions about their future.

Remember that the massive project was initially unveiled by Ofime in October 2021, when he described it as “a first of its sort in Nollywood.”

“It is with great excitement that we announce the unveiling of a new film experience, the first of its kind in this part of Africa. Great movie production has been achieved in Nollywood over the years. Native Media and our other colleagues in the industry have consistently kept the Nigerian flag flying,” At a screening of the film, the filmmaker stated. He went on to say that the Nigerian Railway Corporation and the Ministry of Transportation are both very much involved in the project.