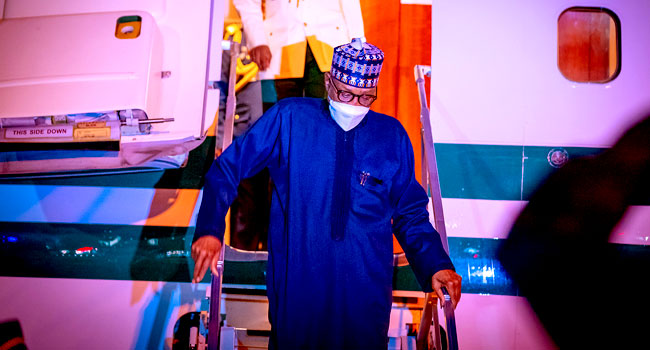 President Muhammadu Buhari concluded a three-day official visit in Madrid on Friday with a flight back to Abuja.

According to the News Agency of Nigeria (NAN), the president’s plane took off from the Torrejon Airbase in Madrid about 8.20 a.m. local time towards Nnamdi Azikiwe International Airport in Abuja.

He is due to attend the Aso Villa’s weekly Friday Juma’at prayer in the afternoon.

Nigeria and Spain signed nine agreements and memorandums of understanding during their meeting with President Sanchez, including a treaty on mutual legal aid in criminal cases, the transfer of convicted individuals, and extradition.

Others focused on economic and commercial cooperation, tourism, sports, health, COVID-19 prevention, and research and innovation.

President Buhari addressed a Political and Business Leaders Forum on Thursday, which was co-hosted by the Spanish Chamber of Commerce, the Ministry of Trade, and the Confederation of Employers.

During the summit, Nigeria’s president warned European countries to turn to Africa for solutions to the global economy’s resource supply concerns.

According to him, Spain has been one of Nigeria’s most significant trading partners for many decades.

On Thursday, President Buhari received members of the Nigerian community in Spain, including professional footballers and Spanish investors with ties to Nigeria.

Nigerians seeking lawful enterprises overseas should always invest sensibly back home as part of their contributions to the nation’s economic transformation.

The Diaspora team that met with the president comprised John Bosco, President of the Association of Nigerians in Spain, and Richard Omoregbe, his deputy.

Others were Super Eagles star Kenneth Omeruo, who plays for Leganes FC in Madrid, and football agent Obinna Okafor.

Others were Mohammed Bashir, an aviation student, Segun Adedoyin, a global affairs student, and Bright Omorodion, a businessman.

Buhari assured his compatriots, whom he characterised as Nigerian ambassadors in Spain, that he had been briefed about how law-abiding they had been in the European country.

“I wish to encourage you to continue to be role models for our youths back home as well as sustain the image of being excellent ambassadors of Nigeria in Spain and live peacefully in the various communities in which you reside here,’’ he said.

The president was escorted to Spain by Geoffrey Onyeama, Minister of Foreign Affairs, Abubakar Malami, Attorney-General of the Federation and Minister of Justice, and Otunba Adeniyi Adebayo, Minister of Industry, Trade, and Investment.

Simi Has Released A New Album 'To Be Honest (Tbh)'