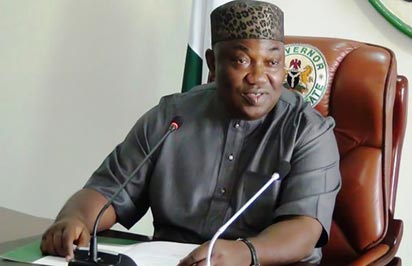 The SOS message was sent to newsmen in Enugu on Sunday in an open letter addressed to Gov. Ugwuanyi.

Members of the Peoples Democratic Party (PDP), Enugu South Local Government Chapter, have sent Gov. Ifeanyi Ugwuanyi a Save Our Soul (SOS) message over the party’s leadership’s highhandedness in the council area.

The members also claimed that the party’s current leadership in the council region did not respect, recognise, or consult with the party’s elders in the area.

The SOS message was sent to newsmen in Enugu on Sunday in an open letter addressed to Gov. Ugwuanyi.

Chief Tony Nnaji and Chief Okwudili Ugwu signed the letter on behalf of the concerned members and elders of the party in the council area.

According to the letter, “as we gear up to make another history in Enugu State, we need to write to beg you to help Enugu South PDP move into the realm of an enduring peace and maturity.

It reads in part: “Your Excellency, to set PDP Enugu South on the path of justice, equity and fair play, we appeal to you to do the following:

“End act of impunity, divide and rule by the party chairman to save the party from imminent collapse in the council area.

“Call back members who have left the party due to the highhandedness of the council’s party chairman, as well as restore the Enugu South women stakeholders and pressure groups.

“It is obvious that political parties and pressure groups work hand in gloves to drive membership. The more vigorous and healthy they are, the better for the health of democratic process.

“These groups are now being treated as leprous. We want them back into the folds.

“Again, wade into the power tussle between the council’s party chairman, and members of his executives who are already disgruntled by the attitude of the chairman to party faithful.

“Caution the chairman to discontinue his onslaught against elders of the party as well as members of his executive who believe in the PDP leadership/agenda against any selfish interest.

“This is important in order to make the party in Enugu South Local Government Area formidable ahead of the 2023 election.

“Teach the party chairman the need to respect elders and stop acting like a demigod.”

It said that the elders are concerned for the peace and progress of the party in the council area, adding that they seek true reconciliation, brotherly love and inclusiveness of all party members as “unity remains the winning tonic”.