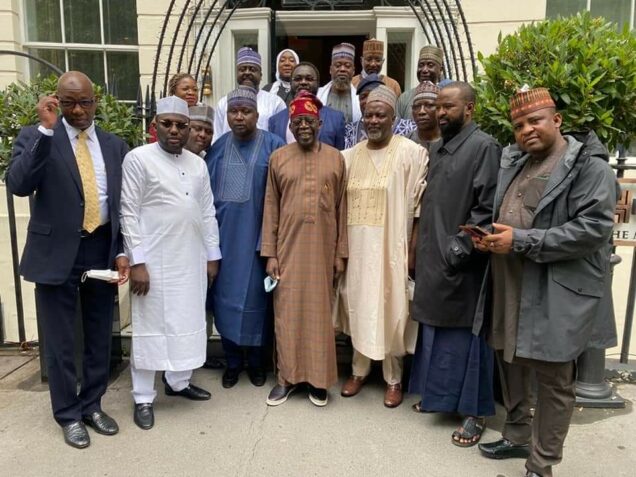 The purpose of the visit was to support Tinubu for President.

Asiwaju Bola Tinubu, the National Leader of the ruling All Progressives Congress, continues to receive visits from Nigeria, with members of the House of Representatives from the north paying him a visit in London to support his rumored presidential bid.

Tinubu has been said to be interested in running for president in 2023, however he has yet to declare his intentions.

A team of northern legislators led by Ahmed Wase, the Deputy Speaker of the House of Representatives, paid a visit to Tinubu in London, where he is getting treatment, on Friday, October 1, 2021.

A member of the team told Punch that the purpose of the visit was to support Tinubu for President.

According to the legislator, “We in the North (House of Representatives caucus) are kind of endorsing his candidature because he is a national leader and you know that he is aspiring (allegedly). Whether you like it or not, he wants to be President of this country. So, we felt that if the northern caucus of the National Assembly — in the House of Reps — would come to see how he is recuperating, we thought that it would mean so much.

“He really appreciated our coming because he said he rated our coming second after the visit of President Muhammadu Buhari. He mentioned that governors and others came but this is a mini Nigeria in the House of Reps, for the entire northern caucus to find time to come and see how he is faring.

“He stood up and walked. I’m sure you have seen the video. I think he has recovered; he is not doing badly at all — this is not politics. I think because of his age, he has to still go for physiotherapy and things like that. These are things that will take time for him to fully do some politicking. He will soon come back to Nigeria.”

While escorting Tinubu to a waiting car with other MPs, Suleja remarked, “Mr President, see you soon,” to which the former Lagos governor answered, “Thank you.”

President Muhammadu Buhari took advantage of the occasion to meet Tinubu while in London for the Global Education Summit on Financing Global Partnership for Education (GPE) 2021–2025).