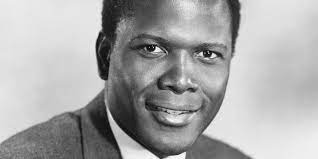 Poitier, the giant screen presence who, during the turbulent era of the Civil Rights movement, became the first Black actor to win the Oscar for Best Actor. He will undoubtedly be regarded as one of the most significant artists of his age.

He reinvented what a Hollywood leading man could be, appearing in a string of blockbusters. In 1967, he starred in the British drama To Sir, With Love, Norman Jewison’s popular mystery picture In The Heat of the Night, and Guess Who’s Coming to Dinner, one of the first films to feature an interracial marriage on American screens. When Dinner? Was made, interracial marriage was still outlawed in 17 states, and it was seen as a burdensome taboo across most of American culture – even outside the racially discriminatory southern states.

In The Heat of the Night, one of Poitier’s hit movie, is also about race, but it’s a sleek criminal thriller rather than a hilarious home chamber piece. Despite its lack of recent prize success, some say that it is the better of the two works. He portrays Philadelphia cop Virgil Tibbs, who is apprehended on suspicion of murder by a racist police chief in a small Mississippi town, played by Rod Steiger in a characteristically harsh performance. In order to prove his innocence, the two create an odd alliance with the goal of finding the true culprit.

His career spanned decades, and he received several awards and honors, including an Academy Award, the Presidential Medal of Freedom, and knighthood.

Poitier received his first Best Actor Oscar nomination for his portrayal in ‘The Defiant Ones’ in 1959, the same year he appeared on Broadway in A Raisin in the Sun.

He went on to play a number of roles, making him one of Hollywood’s most sought-after actors.

From 1997 until 2007, Poitier served as the Bahamas’ Ambassador to Japan after retiring from acting.

Wizkid And Burna Boy Have Released Video For Their Track, 'Ballon D'or'