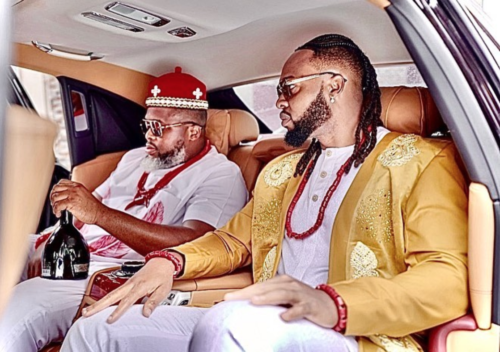 With this star-studded track Egedege, Larry Gaaga, now a culture veteran, shows off his Eastern ancestry and its colorful cultural sophistication.

It was originally composed by Queen Theresa Onuorah, a mythical goddess who shines on the hook, providing a great balance between Flavour’s beautiful chant and Phyno’s indigenous rap prowess, causing a contagious dance fever. Larry Gaaga, Masterkraft, and Marvio developed and rebuilt Egedege.

The richness of the culture and colorfulness within the details, captured in magnificent images filmed by Unlimited LA, give fans a well-rounded Eastern experience to make them feel welcome to sing and dance the indigenous way.

The video features gyrating masquerades portraying and paying homage to the spirits who guard the land, as well as cameos from Nollywood legends like Chiwetalu Agu, Pete Edochie, and Harry Nwachukwu a.k.a. Harry B.

Joeboy Releases A New video For His Song 'Sip [Alcohol]'