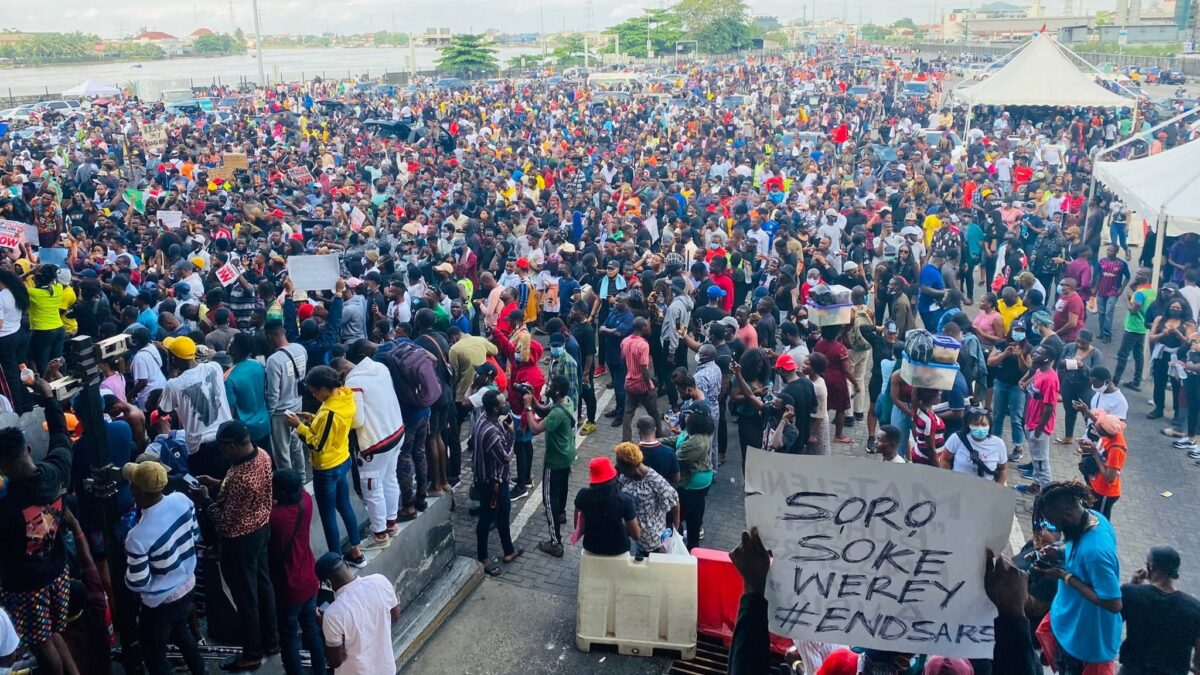 The Panel believes that the claim that the protest would be hijacked by hoodlums is false.

The judicial panel of inquiry conducted by Justice Doris Okuwobi into the Lekki tollgate shooting on October 20, 2020, said there was no need for soldiers to be deployed to the protest site because the protestors were peaceful and unarmed.

The panel also claims that the Lekki tollgate anti-police brutality rally was not hijacked by hoodlums and was not in danger of being hijacked.

According to the panel, soldiers fired live rounds into a crowd of youthful, peaceful protesters on the night, killing 11 people, injuring 24 others, and leaving four individuals missing.

According to the report submitted to Lagos Governor Babajide Sanwo-Olu on Monday, November 15, “The Panel finds that although the Army gave copious evidence of general commotion, violence and mayhem in other locations in Lagos State other than Lekki Toll Gate, there is no justification behind the deployment of its soldiers and officers to Lekki Toll Gate in particular, when there was no violence reported there instead of the other critical areas (for example in places like Orile, Mushin etc), which indeed escalated the violence.

“The deployment of the Army to Lekki Toll Gate on 20/10/2020, in the absence of any reported violence, was totally unwarranted.

“In trying to justify the deployment of the Army, its principal witness before the Panel, Brigadier-General Taiwo stated that once a protest goes past 2-3 days, it will be hijacked by hoodlums. The Panel finds that this proposition was not substantiated.

“The EndSARS protest at Lekki Toll Gate in particular was peaceful and orderly and was not hijacked by hoodlums.

“The Panel finds that the mayhem and violence recorded in other parts of Lagos State did not happen at the Lekki Toll Gate, so there was no need for any apprehension on the part of the government or the security agencies to seek to dispel that peaceful assembly, with soldiers bearing lethal weapons.

“The Constitution of the Federal Republic of Nigeria, 1999 as Amended, in section 40 grants the right of assembly and association, freedom of movement in section 41 and freedom of expression in section 39.

“There was thus no need for deployment of soldiers to the Lekki Toll Gate to disperse peaceful protesters in flagrant violation of these entrenched fundamental rights.”

The panel also finds that “the ineffectiveness of the Police cannot be a justification for the invitation of the Army to Lagos state and the deployment of the Army to the Lekki Toll Gate on October 20th 2020, for the following reasons, amongst others:

i. The EndSARS protest at the Lekki Toll Gate was largely peaceful, organized and orderly;

ii. No single serious or threatening reports of fighting, robbery, attacks, bloodshed or violence emanated from the Lekki Toll Gate before and on the day of the incident of 20th of October 2020;

iii. The Constitution guarantees to every citizen the right to peaceful protest, which at times may result in civil disobedience;

iv. Given the number of people gathered at the Lekki Toll Gate, an invitation of the Army to Lagos State and deployment of the Army to disperse such peaceful gathering should not be an option for a government that had already opened up dialogue with the protesters.

B. The Panel finds in the light of all the above that issue of whether or not the Army kept to any particular rules of engagement is immaterial since the invitation of the Army to Lagos state and the deployment of the Army to Lekki Toll Gate in the first place was totally unwarranted.

“The Army should on no account be deployed against unarmed protesters.”

For the security forces who shot at peaceful protestors that night, the Panel recommended restitution, compensation, public apologies, and penalties.

Nigerian Airports Have Had 6.4 Million Passengers In The Last 6 Months

'There Was An Attempt To Cover Up' The Lekki Shooting, Says Lagos Judicial Panel