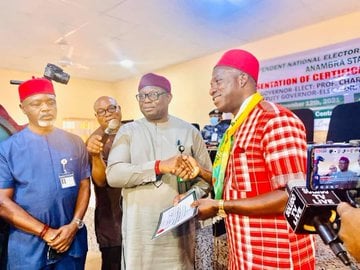 The former CBN governor says his mandate will be used for the benefit of Ndi Anambra.

Prof Chukwuma Soludo of the All Progressives Grand Alliance (APGA) has been declared the winner of the November 6, Anambra governorship election by the Independent National Electoral Commission (INEC).

Soludo received 112, 229 votes in the election, defeating 17 other candidates.

“I have just received my certificate of return from the Independent National Electoral Commission (INEC).

“Thank you Ndị Anambra for the overwhelming support. This divine mandate shall be deployed for the good of the Anambra public and humanity at large,” the former Governor of the Central Bank of Nigeria (CBN) shared in a tweet.

Soludo has received congratulations from a few of the other participants.

President Muhammadu Buhari congratulated Soludo and pledged to collaborate with him.

Andy Uba, the All Progressives Congress (APC) candidate, has called the election a “charade” and a “sham,” and has threatened to challenge the results in court.

In March, Soludo will be sworn in. He will succeed Governor Willie Obiano, who is currently in office.