Home > News > Gulf of Mexico on Fire Due to Leaking Gas 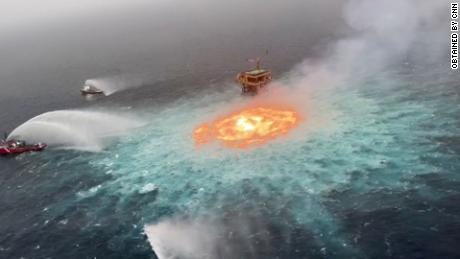 The oil production facility contributes far more than 40% of the company’s daily production of 1.7 million barrels. The incident “began in an undersea pipeline that connects to a platform” at the company’s plant, according to reports, however, the reason for the gas leak and fire remains unknown.

Despite the fact that no human fatalities or injuries have been reported, there are fears regarding the Gulf’s aquatic life. The blaze has subsequently been put out.

The gas spill, according to climate justice advocates, is yet another sobering reminder of the hazards of fossil fuels and the failure to adequately advance alternative energy sources.

Previous disasters induced by oil production have occurred in the Gulf of Mexico. A BP oil rig exploded in 2010, spilling approximately 130 million gallons of crude oil into the Gulf, making it the largest oil disaster in US waters.

The BP oil spill was considered as the final straw in the already diminishing community of Black fishermen who had made a career in commercial fishing in Gulf states, as the Gulf borders southern states with disproportionately Black populations.

Wizkid's 'Essence' Made it to Apple Music Top 50 Song Chart