Home > News > Gov. Ganduje’s Wife Has Been Detained By The EFCC 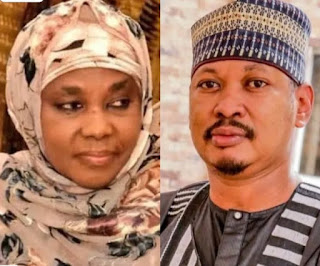 A land issue has ensnared the governor’s wife and her son.

The Economic and Financial Crimes Commission (EFCC) has detained Hafsat Ganduje, the wife of Kano Governor Abdullahi Ganduje, in a bribery and land fraud case.

Her son, Abdulazeez, is said to have exposed her to the anti-graft agency, according to several sources.

On September 13, Hafsat Ganduje had been invited to the EFCC headquarters in Abuja. She, on the other hand, declined the invitation. She was then threatened with arrest by the EFCC.

According to the Premium Times, authorities are interrogating Mrs. Ganduje about charges of land fraud made in a petition filed by her own son.

According to Abdulazeez, he was approached by a property developer to assist in the acquisition of several plots of land in Kano for hundreds of thousands of dollars and at least 35 million naira in “facilitation commission.”

Abdulazeez stated he handed the money to his mother, Mrs. Ganduje, in dollars.

However, the property developer found months later that the plots of land he had paid the first family for had been given to other clients.

Facebook Blames The Seven-Hour Downtime On A "Faulty Configuration Change"