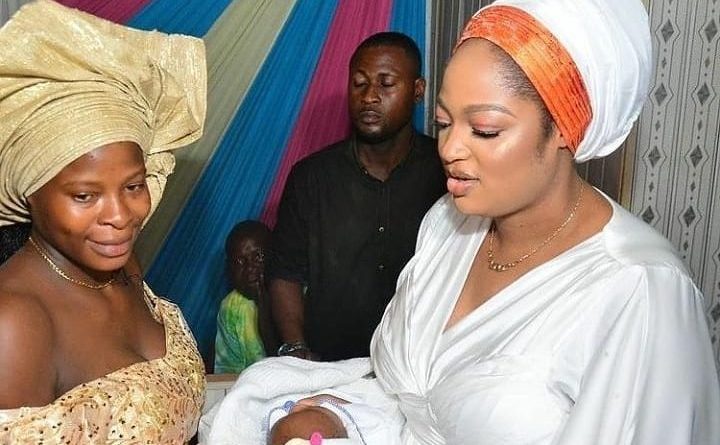 Kemisola Ogunniyi, an #EndSARS protester who gave birth in jail, had her daughter christened on Wednesday in Ondo State.

Remember that during the October #EndSARS demonstration in Akure, Ogunniyi was arrested and charged in court with three others for allegedly vandalizing a property belonging to the Ondo State branch of the All Progressives Congress, and was remanded in the Nigeria Correctional Service Centre in Akure.

She gave birth to a baby boy last Wednesday, and on Tuesday, the state High Court in Olokuta, Akure, granted her bail on humanitarian grounds.

At the child’s christening at Vera Christian Assembly in Ayedun Quarters, Akure, the Ooni of Ife’s wife, Olori Naomi Adeyeye Ogunwusi, who expressed her sadness over the baby’s birth, gave him with baby goods and food for the infant’s family.

“When I heard the news, I was touched to learn that the mother gave birth in jail custody,” Olori remarked. That is why I have come to see you today (Wednesday). The baby is a unique young man. I’m going to remain with my family. I want Kemisola to think of me as her mother, sister, and friend.

Kemisola expressed gratitude to everyone who helped her get her bail after the baby was delivered in her words.

“I am grateful to God for my life, as well as the government and everyone involved in my case. She stated, “God will be all of you.”

Mrs Felicia Ogunniyi, who claimed she had no idea her daughter was pregnant, pleaded with the state government to help his daughter resolve the legal dispute.

Oxlade Collaborates With Mayorkun On His New Track ‘Bad Boy.’