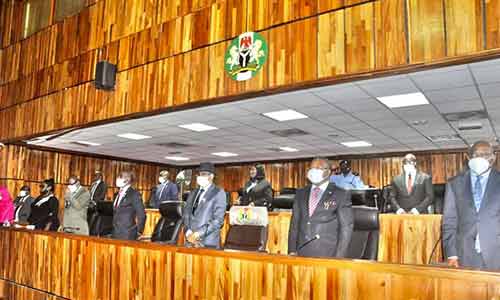 The National Human Rights’ Commission’s (NHRC), on Monday, ordered that an independent doctor be brought to ascertain the DNA of a boy who allegedly disappeared during the EndSars protests.

The panel chairman, Justice Suleiman Galadima (Rtd), gave the order at the resumed sitting of the panel in the case of alleged abduction and enforced disappearance of a boy, filed by one Esther Tanko.

Tanko had petitioned the panel alleging the abduction and enforced disappearance of her three -year-old son, Elijah Tanko, in the petition, marked 2020/IIP-SARS/ABJ/66.

Joined as respondents were the investigation police officer (IPO), Desmond Abela; defunct SARS, FCT; FCT Commissioner of Police and the Inspector-General of Police.

The petitioner had on Nov. 17, 2020 told the panel that she wanted her son back, adding that the police had denied her having the child back.

Chief Pathologist at the Asokoro District Hospital, Abuja, Dr Kelvin Nwabueze Ezike, was called to testify on the analysis of the results of the DNA he conducted.

Dr Ezike had informed the panel that he was contracted by the Commander, IGP’s Intelligence Response Team (IRT), DCP Abba Kyari, to conduct DNA tests on a child they recovered from alleged child traffickers and was being claimed by a number of women.

According to him, about five women initially had filed claims for the child.

Meanwhile, Justice Galadima, the panel’s chair, has adjourned the case until Nov. 19, following the prayer of the petitioner for an independent pathologist to carry out a DNA test to verify the child’s biological mother.

NAN reports that the panel resumed sitting after six months absence this Monday, when a total of eight cases were heard. Four of the cases were reserved for reports, while three were adjourned to Nov 1, for the police to adopt their final written address.

A deputy director in the Corporate Affairs and External Linkages Department of the NHRC, Fatimah Agwai-Mohammed had stated on Saturday that the panel would resume sitting with the hearing of addresses.

According to Agwai-Mohammed, a total of 295 petitions were received, 55 concluded , 22 were either struck out by the panel or withdrawn by the petitioners.

”Besides, 33 petitions were ready for the payment of compensations, including other legal and administrative remedies in accordance with the relevant laws.

“Although the panel did not sit for about six months, following some logistics challenges, but it had, within the first four months when it commenced sitting, concluded 55 complaints, while 75 are in various stages of progress”, she stated.

She added that the panel sat last in March, 2021 and had hoped to continue sitting, but couldn’t due to the stated reasons.

The News Agency of Nigeria (NAN) recalled that the panel was set up by the Federal Government in November 2020 following the EndSARS protests, triggered by nationwide allegations of police brutality, including unlawful detention, extra-judicial killings, torture, enforced disappearance, among others.

'Your Destruction Is Near, You Have Nowhere To Hide,' Buhari Warns Terrorists