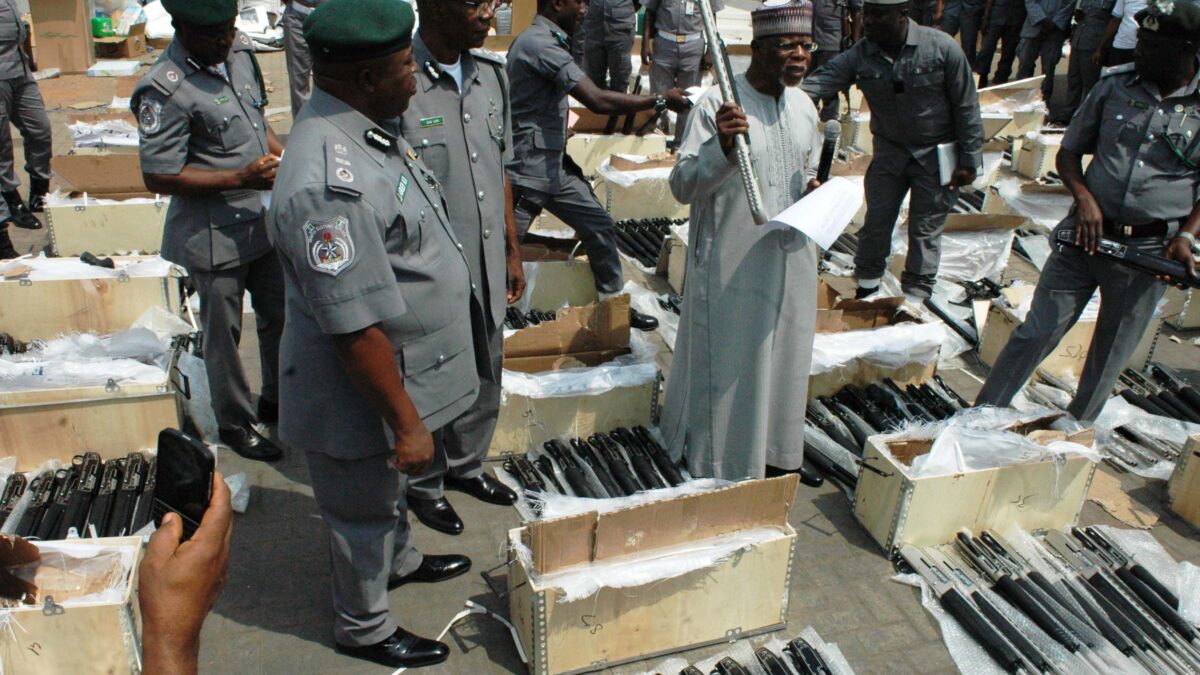 The Acting Controller of the unit, Deputy Comptroller Hussein Ejibunu, told a news conference in Lagos on Friday that the seizure was among the 28 seizures made in the last three weeks.

Ejibunu listed the seized items to include 8,000 bags of 50kg rice, 1,419 jerrycans of vegetable oil, 1,301 bales and 128 sacks of secondhand clothing, 233 bundles of wrapper and 621 cartons of expired medicaments.

He said that 856 jerrycans of 25 litres of fuel, 1,516 cartons of frozen poultry products, 751 pieces of AAA cartridges and 70mm live ammunition were part of the seizures, as well as 18 units of motorcycles.

“The mandate of FOU as a critical enforcement arm of the service, particularly in South-West Zone, cannot be overemphasised.

“Besides stemming the tide of smuggling in the zone, the unit stands as a police, providing the much needed security to other customs area commands in the zone.

“There is also the implementation of the government fiscal policy, facilitation of legitimate trade and inter-agency functions; so, we remain resolute not to toy with the confidence reposed on us by the CGC, Col. Hameed Ali (rtd),” he said.

According to him, the seizures are an indication of the unit’s readiness to make South-West Zone a non-fertile ground for smuggling to thrive.

The controller added that some of the siezures were made at Gbaji and Agbara in Ogun, and the creeks.

He noted that smugglers had resorted to using motorcycles to smuggle rice through bush paths not accessible to vehicles.

Ejibunu said that ambush attacks on customs officers were worrisome.

He said that on Oct. 16, a customs patrol team ran into a convoy of more than 24 vehicles laden with smuggled rice and intercepted 12 on the Abeokuta/Sagamu Interchange.

He said that as team made its way into Lagos, more than 300 smugglers and hoodlums attacked it with pump-action rifles and others weapons and, in the process, the patrol vehicle was riddled with bullets, with its windscreen shattered.

“The aftermath of the attack was the forceful retrieval of eight of the 12 intercepted vehicles and injury to two officers.

“This is what we face every other day but one thing is very certain: We remain undaunted in the pursuit of our mandate no matter the level of attack on our operations in the field.

“Let me sound a note of warning to smugglers: No man has the monopoly of violence.

“We have the backing of the law to bear arms, and to that extent, we will not hesitate to deploy the Rules of Engagement in such dangerous circumstances.

“Parents should warn their wards against smuggling,” he said.

He added that within the period under review, a total of 37 suspects were arrested for alleged offences.

He said that six of the suspects were already charged to court, 12 on administrative bail while 19 were still in custody either waiting to be charged to court or be released through bail.

Ejibunu said that the activities of the unit was not restricted to borders alone, as its searchlight was equally being beamed on seaports in a bid to stamp out or minimise sharp practices by unscrupulous elements.

He said that the contents of the container were being transloaded in two trucks.

“As at the time of interception, 248 bales of secondhand clothing had been transloaded into a DAF truck, 240 bales into a Scania truck while 216 bales were remaining in the container.

“Both the container and the two trucks were brought to FOU ‘A’ and converted to seizures,” he said.