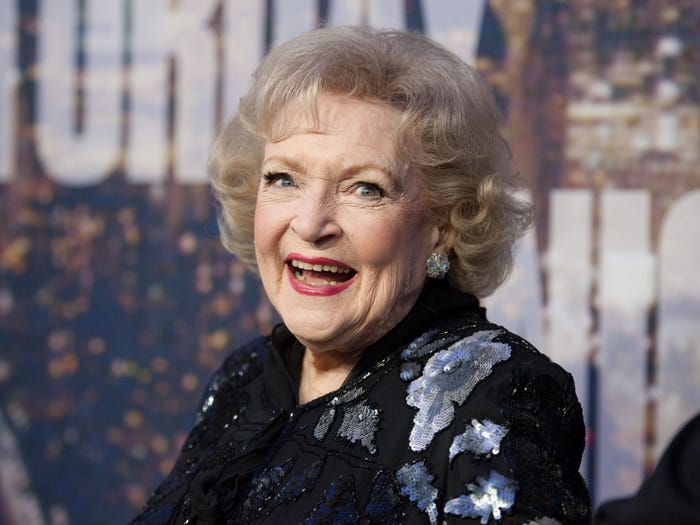 Betty White, the star of The Golden Girls and an early pioneer in television comedy, dies at the age of 99.

Betty White, the beloved Golden Girls star, died at the age of 99, only three weeks before her 100th birthday.

White, who became America’s geriatric darling following Emmy-winning turns on television comedies, is alleged to have died at her home on Friday morning, according to police enforcement. She had a career spanning more than 80 years.

She had a long and illustrious career as a comedienne, actor, author, animal rights activist, and one of the first female television pioneers.

‘Even though Betty was about to be 100, I thought she would live forever,’ her agent and close friend Jeff Witjas said in a statement issued to people magazine

‘I will miss her terribly and so will the animal world that she loved so much. I don’t think Betty ever feared passing because she always wanted to be with her most beloved husband Allen Ludden. She believed she would be with him again.’

On January 17, 1922, White was born in Oak Park, Illinois. Her legal name, ‘Betty,’ is not a shorter form of ‘Elizabeth,’ since her parents did not want her to be associated with any derivation or nicknames such as Beth, Liza, or Ellie.

She began her entertainment career on radio in the late 1930s, and by 1939, she had made her television debut singing on a Los Angeles experimental channel. She became a regular on ‘Hollywood on Television,’ a daily five-hour live variety program, in 1949, after participating in the American Women’s Voluntary Service, which aided the US effort during WWII.

She co-founded a production firm and served as co-creator, producer, and star of the 1950s sitcom ‘Life With Elizabeth’ a few years later, becoming a pioneering woman in television.

White was a fixture on television in the 1960s and early 1970s, anchoring coverage of the annual Tournament of Rose Parade and starring on game shows like ‘Match Game’ and ‘Password.’ In 1963, she married her third and final husband, ‘Password’ presenter Allen Ludden.

On ‘The Mary Tyler Moore Show,’ White rose to fame as the snarky, lustful Sue Ann Nivens, the presenter of a home-making television show whose motto was ‘a woman who does a good job in the kitchen is sure to reap her benefits in other sections of the house.’ In 1975 and 1976, White won Emmys for best supporting actress for the role.

In 1986, she was nominated for another Emmy for ‘The Golden Girls,’ a sitcom about four older ladies living together in Miami that represented an age group rarely seen on American television. White was also nominated for six Emmys for her role as the widowed Rose Nylund, a charming, naïve, and sassy Midwesterner on the sitcom, which aired from 1985 to 1992 and was one of the top-rated series of its time.

Following a less successful sequel to ‘The Golden Girls,’ she had a string of tiny film roles, talk-show appearances, and one-off television performances, one of which earned her an Emmy for a guest appearance on ‘The John Larroquette Show.’

By 2009, she had established herself as a household name thanks to more frequent television appearances and a role in Sandra Bullock’s film ‘The Proposal.’ She featured in a Super Bowl ad for Snickers candy, in which she took a hard blow in a mud puddle during a football game.

After a teenage fan initiated a Facebook campaign to have White host ‘Saturday Night Live,’ she ended up starring in every skit on the night and won yet another Emmy.

In 2010, the Associated Press named her entertainer of the year, and a 2011 Reuters/Ipsos survey revealed White, then 89, to be America’s most beloved and trustworthy celebrity, with an 86 percent favorable rating.

As presenter of ‘Betty White’s Off Their Rockers,’ a hidden-camera show in which older actors perpetrated pranks on younger people, White’s humorous and brassy personality came in useful.

'I Have No issues With Davido' - Burna Boy