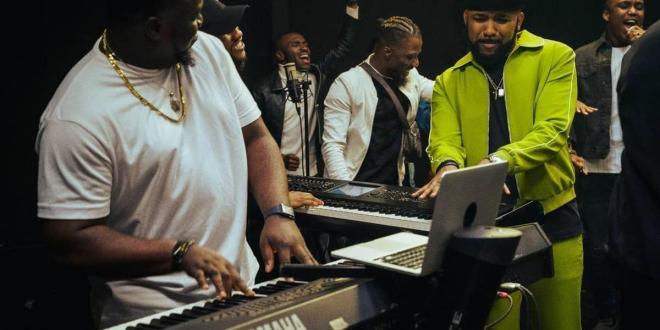 Banky W discusses the inspiration for his upcoming album.

Banky W, a Nigerian R&B legend, has stated that he has completed the recording of his next album ‘The Bank Statements.’

Since his cult masterpiece ‘R&BW’ in 2013, Banky W hasn’t produced a studio album.

During a chat on the YouTube channel of preacher and certified relationship counselor Kingsley Okonkwo about his forthcoming album, the singer disclosed that the title will be ‘The Bank Statements.’

“I’ve taken some years off. I heard somebody once said that artists never retire; they just stop when they no longer have any stories to tell. And I’ve just lived a lot of lives in the last few years that I have been quiet in the music scene. I have a lot of stories to tell, about love, relationship, about God, about country, about life,” Banky W said.

“I have recorded what I feel is a life about; it’s called ‘The Bank Statements’. If you think about your bank statement from January to December, it’s kind of a snapshot of your life.

“What is important to you, what you are spending on. If you look back to your bank statement of last year, it will just give you what your life is.”

The album’s idea, which includes a song for each month of the year, was stated by Banky.

“So the album is called the Bank’s Statement one because it’s Banky’s statement and also conceptually, and there is a song for every month of the year,” he said.

“So there is a January and December song because you have to start and end the year with God. There is a February song, which is Valentine’s Day so it is a love song to my baby.

“My birthday is March, so there is a turnup kind of song for my birthday. “The ninth song of the album is for our son because pregnancy takes nine months and it’s called ‘Champ Song’.

“It’s a very intentional, thoughtful, creative and powerful album. It’s actually my favourite record because now I can sing about love from a place of currently experiencing it.”

The trio talked about celebrity, family, and their Christian religion during the lengthy chat.

“I’ve seen people chase fame till it kills them, money doesn’t change a man, it reveals him,” the singer said.

“That kind of captures my mindset with this fame thing. Fame is a drug, it’s as powerful a drug as any other substance that you can think of.

“These days you might not be addicted to cocaine, heroin or anything like that but we are all kind of addicted to our phones, and to Instagram and to likes and to showing off. Everybody is addicted to fame on some level.”

The musician said that his relationship with God has aided him in managing his celebrity status better than his colleagues.

“There is a God-shaped void in everyman. Fill it with God. Knowing God is really what has grounded me. Tiring to be extremely self-aware,” he revealed.

“The number one tool for me in coping with fame is remembering to stay humble, remembering that everything you have was a gift. It doesn’t belong to you, you are just in charge of it while you are here. Use it in service for others and in service to God.”

Gov. Ganduje's Wife Has Been Detained By The EFCC