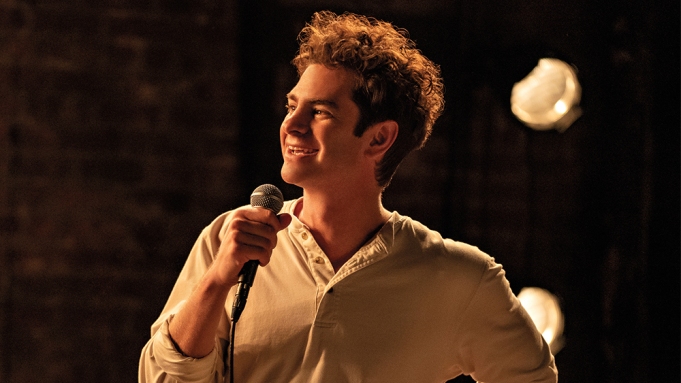 Tick, Tick…Boom! is a compelling ode to an artist struggling to establish his voice, with Andrew Garfield giving a remarkable performance at the film’s center.

Jonathan Larson will be remembered as a young prodigy. He made a name for himself in musical theater in his 30s with Rent, but tragically died before the production debuted due to an aortic dissection. Instead of a lengthy career filled with great work, we can only get a peek of Larson’s beginnings, which he created himself with the autobiographical musical Tick, Tick…Boom!

Garfield’s character, Jon, is at a cross roads of his life. He’s about to turn 30 and feels like he hasn’t made it in the musical theater world like his heroes, so if his long-in-the-works Superbia doesn’t propel him to mainstream fame, he may have to abandon his goal. But, before that occurs, he’ll put everything he has into it, even if it means alienating his best buddy Michael (Robin de Jess) and girlfriend Susan (Alexandra Shipp). Even though he’s surrounded by people whose lives are being cut short by AIDS, Jon feels like this is his last chance to do anything with his life. He’s struggling to finish Superbia and collect the money to make his workshop as excellent as it can be.

Jon’s trip might seem a touch cliched, but a fantastic job was done to the material. That’s not to say Larson’s work isn’t good, but Tick, Tick…Boom! Feels highly specialized to a certain type of young person, and if you’re not in that orbit, Jon’s all-or-nothing mentality makes the desires seem increasingly remote. Miranda and Garfield, on the other hand, make those wants feel real and alive.

Jon’s entire being is devoted to this artistic endeavor, and he fears that if he doesn’t succeed now, he will be doomed to an unfulfilling life. It’s a good question to consider what to do when you have the talent and put in the effort, but nothing comes of it. Even while artistic industries are far from meritocracies, loving something and having to do it (which I believe is the primary distinction between creative people and everyone else) can turn your world and sense of self upside-down?

Tick, Tick…Boom! may or may not appeal to you depending on how much you’re willing to relate to the world of musical theater and the desire to create, but with good songs, thoughtful direction, and a fantastic lead performance, the film manages to be the best kind of tribute that shows Larson in his own words and with all of his flawed humanity. Tick, Tick…Boom! is motivating because it shows how we reappraise our life, the people around us, and what causes us to grow rather than merely age.